Today I installed FBOS v7.0.2-beta from the GitHub Release link to the IMG file.

Is the supplied config wrong for the target AMQP server cloud ?
It seems to be trying to use clever-octopus.rmq.cloudamqp.com

These errors come from the BotState link, not the NervesHub link.
Looks like it begins after the first AMQP “re-key”.

John are you still seeing this issue? I’ve noticed this but only on newer farmbot versions in development. I had assumed it was a client version mismatch. By the way are you on staging.farm.bot or my.farm.bot?

Connor, yes, still occurring I believe though will verify when I return home later.
Just a thought : I have no physical firmware_hardware plugged in. In case it helps to know that.
Yes, I’m on my.farm.bot. Thanks.

I’m investigating this, but i haven’t made much progress on it. I’ll let you know what i can find.

Hi @connor.
Maybe the latest amqp package (1.1.1) fixes this, and am trialling this change as we speak. 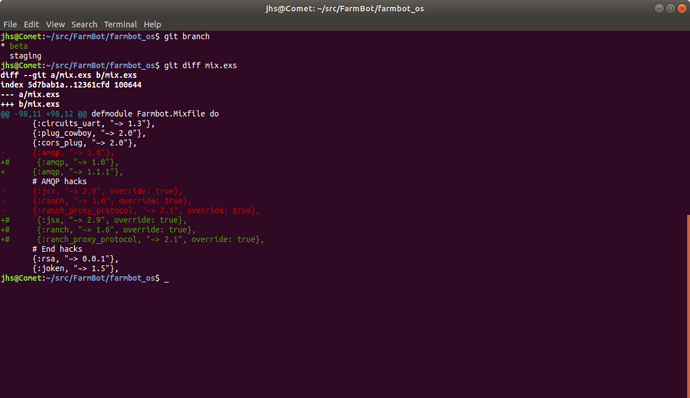 Great. Let me know if that works for you. I’m going to add that dependency update to the latest beta either way.

I’m going to add that dependency update to the latest beta either way.