Has anyone been able to add a new input using the aux connectors and adding a new sensor? I have spent a lot of time looking at diagrams, testing all of the inputs and have not been able to make any of them work. The aux connector has D2, D3, D18, D19, D38, D42, A6, A7, and A8. I have no idea what pin numbers they map to but I have tried every one in the farmbot software. It looks like they are all pulled up to about 2.5 volts and if I take them to ground they don’t show up on any of the inputs in the existing software. I am look at adding a level sensor for a rain barrel to tell me when it is empty and will simply take that input to ground. Any help would be appreciated.

It’s been a while since I’ve added a custom sensor (it was back in the v1.2 days, and my focus is mainly on the software aspects of the project). I will ask @Gabriel and @roryaronson when they are in the office on Monday. Details to follow.

For me the servo ones worked on v1.4, they gave the cleanest signal.

I haven’t tried any of the other analog pins.

You obviously need to connect to ground.

I have v1.5 and I have been measuring with a meter. What pins are mapped to D2, D38, and D42? I have tied them directly to ground and I see no change any inputs.

In the web app they are the same pins as the numbers i.e. 2, 38, 42 next to those pins on the Farmduino is a ground pin.

I have figured it out- I had measured about 2.5 volts on the digital inputs and assumed that they were being pulled up. I had gounded the inputs and looked for and change and saw none. I just put the inputs at 5v and can see it so I just need to add a pull up resistor. The pinouts also were not well documented.
The analog inputs seem to be on pins 60, 61, and 62 in the software.
Thanks for everything-

I don’t mean to steal or re-direct this thread, but it seemed a good place to ask.
Does the current FarmBot firmware have a mapping/report function for soil conditions like moisture, pH,and nitrate levels ?
Given the number of soil sensors available (or under development), this would seem to me a good function to have for soil condition control and garden planning.
Since “Ideal” soil conditions vary from plant to plant, having a method to, not only measure/monitor these parameters, but to be able to map them over the planting area and allow for historical trending, would be a nice option.

Only for moisture. No pH or EC sensors are shipped. The problem with those sensors especially pH is that they need to be regularly recalibrated. Commercial growers recalibrate pH at a minimum daily. It’s not as simple as adding a new sensor tool for pH and EC there will still be manual processes involved. Some processes could be automated however. Have a look at Hydrobot.

Thanks for the reply, but the question wasn’t really about adding sensors so much as the ability to map the values on the GUI and/or store them in memory based on the coordinates of the planting area.
I’d think having the ability to map and record these values from either automatically from a sensor connected to a FarmBot, manually from other testing means, or combination of both, could be a valuable tool.
I’d think this would just be a programming/software feature addition. Not sure how hard or complex it would be to add in.
From an operational robotic standpoint of view, no real value added for the effort, but from a grower perspective, it can make a big difference.

Cool add it to feature requests.

FarmBot-connected-Sensor readings already have stored co-ordinates . . see pic below.
Mapping those points on “the GUI” is some work in the Web App I suppose . . are you able to contribute ? 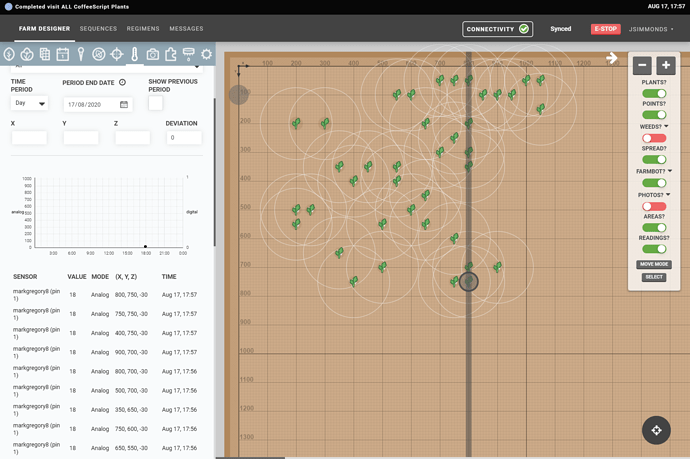 Willing, but not sure how much I’d be able to contribute.
I’m fairly new at both FarmBot and code writing. It will be later this year to early next before I’ll have the time to start trying to digest the operating system & GUI.
JIC anyone else wants to try, I’d recommend the manual input coordinates come from clicking a spot on the GUI map with possible drop-down select menu for pH, nitrate level, salinity, etc., general soil testing methods.
Sample location wouldn’t need to be exact as leaching tends to equalize soil conditions in any general area.

Is there somewhere that lists the stored data types and how reports are formatted ?
If not, a screenshot of those would be nice for reference.