We’re working with FarmBot Genesis v1.3 but without encoder cables so we’re attempting to add in endstops instead. So far we have 2 endstops (x min and y min) using simple buttons. They’re connected the the Farmduino as shown. The x endstop doesn’t work at all and the y endstop only works when connected as shown, between GND and 5V. Both gave the same result when we tested them with a multimeter and pressed the button (high resistance but becomes low when the button is pressed) so we’re not sure why only the y end stop works. We’ve also tried swapping them round to see if it’s a problem with the pins but, in any of the 6 endstop slots, only the y endstop works.

and the FarmBot stops moving.

Anyone got any ideas what’s going wrong here? Why is the x endstop not working and why does it not matter whether or not it’s enabled in settings? 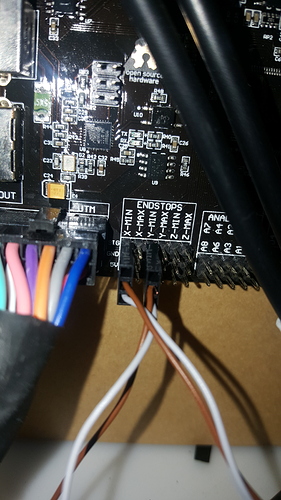 Did you try to connect your switch to GND - SIG?
Right now you are causing a short circuit between 5V and ground! That’s why the board always reboots (UART Handler died).

Thanks for your help

Did you enable the setting STOP AT HOME? This should prevent the axis from moving into negative coordinates.