A few days ago, during the execution of a programmed event, the machine stopped.
From the webapp the farmbot is disconnected and shortly appears the signal for the configuration in the list of wifi networks.
I state that all the devices that I have at home (and in the garden) have not had problems connecting, I also restarted the router at home but I have not solved.
I have run multiple times the configuration but without success, the data entered are correct but after a few minutes I find the wifi signal of the farmbot.
Also I loaded the last FarmbotOS in the Raspberry card but also here, after the configuration reappears the wifi network of the farmbot.
Finally I replaced the Raspberry and the memory card but the problem reoccurs.
I noticed a message during the configuration that invites me to contact the developers of the farmbot, I am attaching a screenshot.
Waiting for your answer, I greet you. 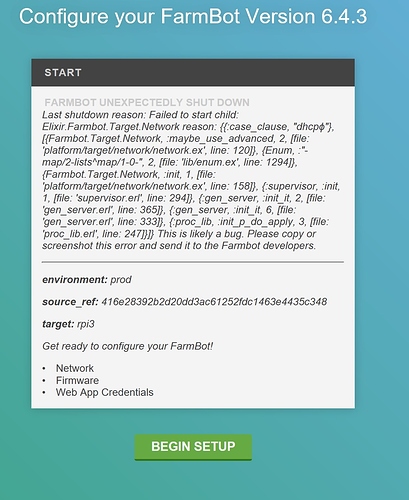 This is very strange. What browser are you using to configure Farmbot? Your browsser seems to be inserting a very strange character while configuring Farmbot.

Hello and thanks for the quick reply.
I tried both from the PC (win10) with firefox and edge, and from smartphone (android 7.0) with chrome. The screenshot was taken from the edge.

Firefox should work, however we mostly test against Google Chrome, and Android should work great also. Is your smartphone and windows 10 computer set to use English primarily?

What language do you set primarily? I don’t believe Farmbot’s Configuration utility is very well translated. There may be something we can do to force your browser to use english.

5 posts were split to a new topic: WiFi network not found error

Good evening, I apologize for the late reply.
The only language in my system was Italian. Today I have carried out new tests, I have set as primary language the English (UK) both the operating system (Windows 10) and the browser (Firefox).
Once the configuration procedure is completed, the farmbot wifi network disappears from the list but the machine is disconnected even after 10 minutes.
To repeat the configuration I have to remove and restore the current because the wifi network no longer appears. I made some screenshots. Thanks for your help, greetings. 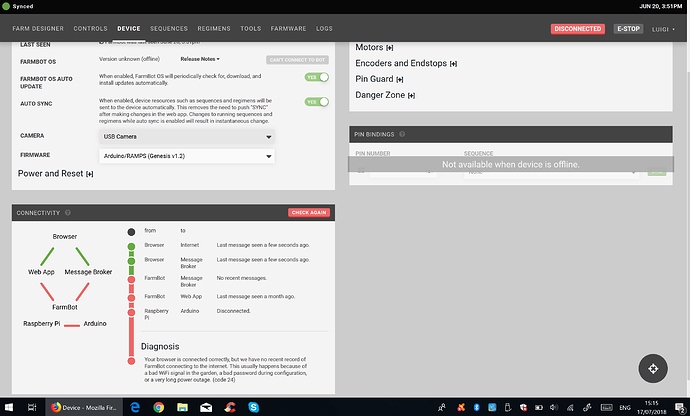 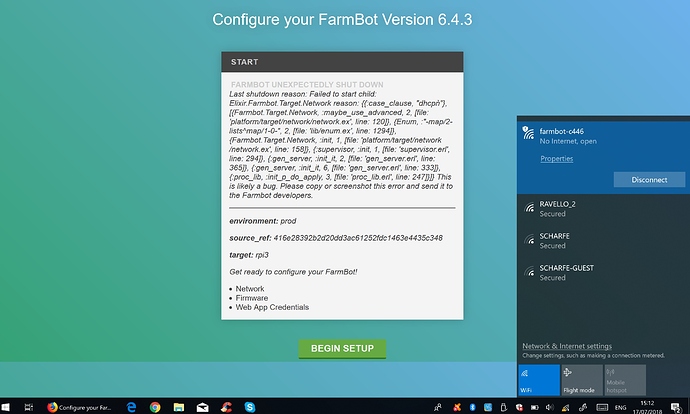 2 posts were split to a new topic: Firmware didn’t send any Info for 10 seconds