Could not establish communication with arduino: :noproc

I manually moved the Y axis while the FarmBot was turned on to manually home it. Before you roll your eyes the Calibration and Homing Documentation did not warn that I had to have the farmbot turned off to manually home it. I am now getting “Could not establish communication with arduino: :noproc” error and device settings are shown as below. I have rebooted a few times but no effect.

What steps do I take to recover from this? 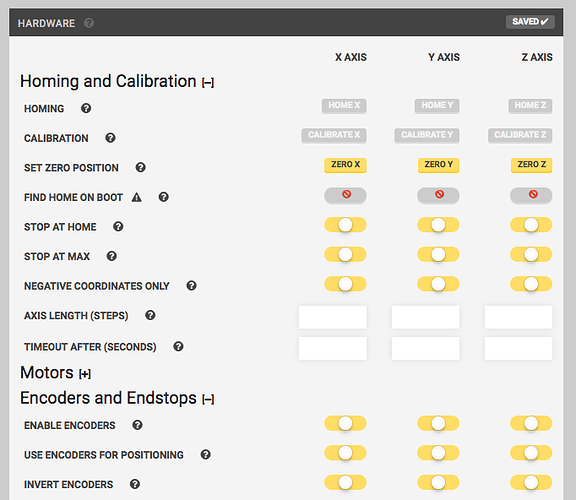 Could the moderator please reopen this thread?

I incorrectly reported the solution - “Back up and running I just moved the Pi usb cable to the arduino to a new port. I won’t manually move it when its on again!” that was a red herring.

When I manually move, home or calibrate the Y-axis it moves the Z axis over to sit next to the gantry. Then I get the “Could not establish communication with arduino: :noproc” error and loose all access to the arduino.

It’s like it passes a point on the Y-axis and that then shuts off access to the arduino. If I manually move it back to the centre again it works.

If I enable encoders I get a lot of jerky movement which may be related to this post which I will try to follow Questions about encoders and stepper motors.

However I still don’t understand why I loose axis to the arduino? Any ideas?

Below are my device settings. 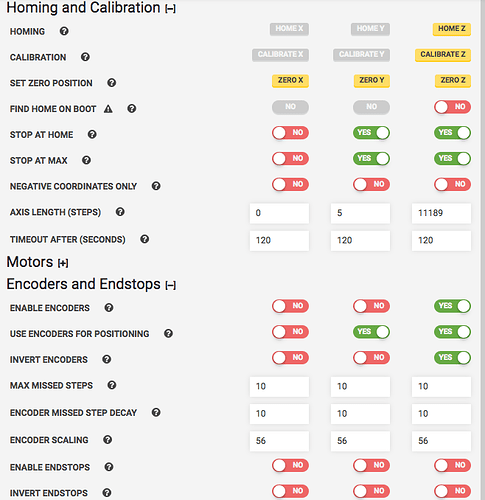 Yesterday it was the first time my farmbot was running overnight. This morning I disconnected the farmbot because I had to retangle an twist in the driveway pulley. Afterwards the FarmBot did not reconnect.

So I used the FarmBot Configurator to connect again.

After the error “Could not establish communication with arduino: :noproc” occurred. I tried to use different usb ports for the arduino / RPi connection, but the problem stilled occurred.

The adapter 12 to 5 V Adapter between the Arduino and the RPi is also getting hot really fast.
The light of the Arduino is burning. Sometimes the yellow light on on the RAMPS is burning as well so there is power on the board.

Does somebody have an idea how I can solve the problem?

Thanks for your message. Just going to write back my findings to the forum in case it helps someone.

The problems I was experiencing were caused by endstops I had wired in on the Y axis which I was trying to configure and use to calibrate the farmbot. Once I unplugged the Y axis endstops the arduino errors went away.

I am going to try and use the encoders now for calibration as they seem to work but if they aren’t accurate enough then go back and fight with the endstops to get them working.