I get a delay during one of my sequences. The first delay is between the two move absolute commands. there is about an 8-second delay when finishing the first move command and then the FB will begin the move command for the last step in the sequence. (highlighted in red) 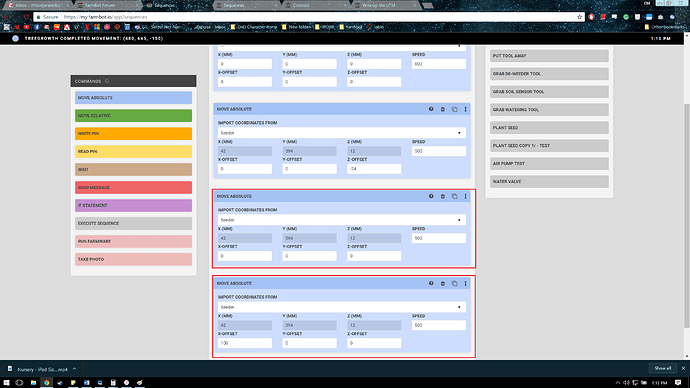 in addition to that, I get this delay of about 8-10 seconds between the “grab seeder tool” sequence and the move absolute command. The rest of the entire sequence executes just fine.

I also remember reading a comment that said something about adding a wait command and that it might help with the issue but could not find the post I read it from. 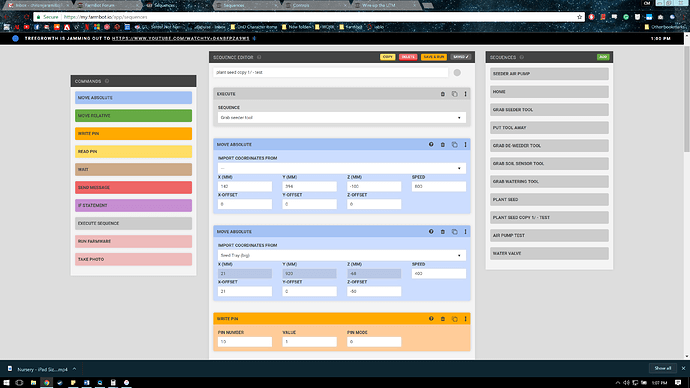 is there anything I can do or change in the sequence to get rid of the delay?

In my (limited experience), when you engage multiple axes in a single move, all involved motors stay powered until all axes have finished traveling. You can notice this when your Z-axis takes a longer time than your X and Y, for example.

Basically your arduino or something (again, my electronics knowledge is very limited) waits until everything is done before unpowering those motors. I can easily verify this because I have a ton of backlash on X, which doesn’t occur until Z is finished.

Your 8 second delay might be related to arduino thinking one of your axes is still traveling. During your delay, you should try pushing your gantry or something to see if the motors used in the last move are still being powered (even though your “always power motor” option is off).

If you can’t push it, your arduino isn’t idling, although for you it appears so.

I will test this and see if my motors are engaged during that last move command.