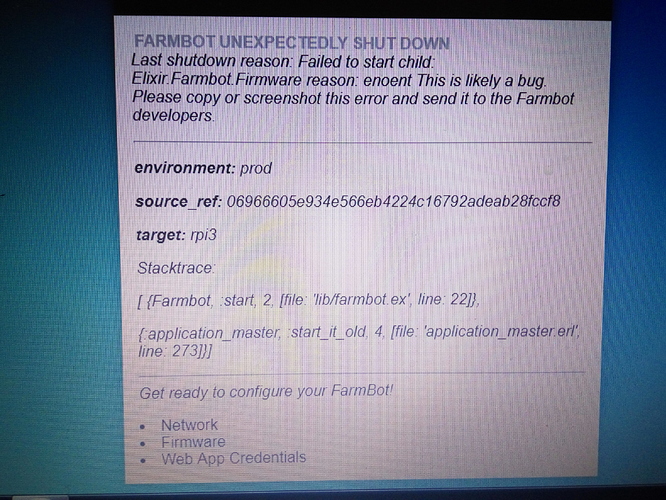 Hello everyone,
I have exactly the same problem.
Same behavior from the Update button (5.0.9 installed and functional) or from the .img file 6.0.1, from a private server in 6.1.0 version or from my.farmbot.io
Any idea?

This is likely an electronics issue. Which boards are you each using?

Unplugging anything plugged into the Raspberry Pi might help isolate the issue.

arduino mega 2560 and ramps 1.4
il try to unplugged tomorrow…
thanks for reply 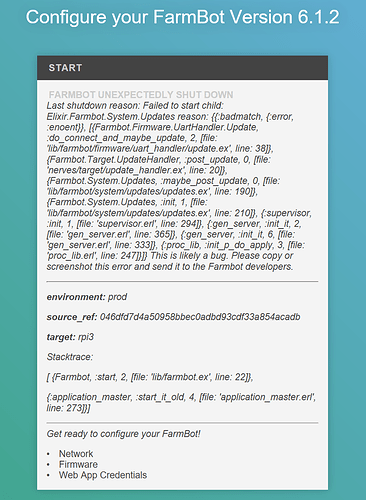 You can try removing RAMPS from the Arduino so that only the Arduino is plugged in to the Raspberry Pi. That would narrow the issue down to either the Arduino or some connection on the RAMPS board causing a short.

same issue with only the raspberry pi and arduino powered by usb, without RAMPS and wire.
it seem to be a “made in china” arduino… i buy a genuine arduino and retry…

Do you think that can be a problem while it works good with a version 5.0.9 …?

For knowledge, what is so different between versions 5 and 6 to no longer work ??

Hey,
issue solved with a new arduino, not genuine but not low cost…