Its good to be back after a long seattle winter. I’ve been hard at work 3d printing and excited to get back to this. Hope you all have been well.

Before it got rainy, I put a couple of tarps on my Farmbot and strapped them in place. I left power on for the winter because . . . maybe because I’m stupid but I rationalized it with:
a. I want to make sure it stays working
b. Being on will be extra protection against moisture
c. I’ll be able to upgrade it when new releases come out and avoid having to do multiple later.

Throughout the winter I checked on it and upgraded it.

A month or so ago I upgraded it. Then I instructed it to reflash . .then unlocked it. After that, the Farmbot was not happy (i.e. offline). I went outside and saw that the Farmbot SSID was being broadcast but that it had unexpectedly shut down. So I left it for better weather.

Today I brought the SD card in and reflashed from a fresh download. I put it back in and it booted up.

I configured it for Ethernet - again, Ethernet, I say. I only use WiFi to select Ethernet and enter my credentials. Configuration seemed fine and it rebooted.

But it never came online. I went back to it several minutes later and it was advertising the SSID again. 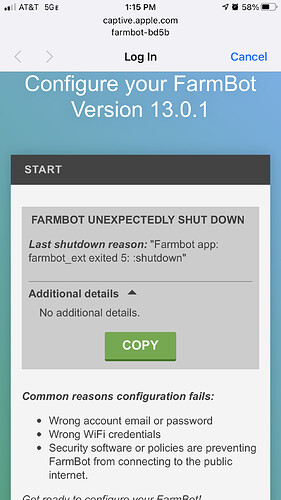 I saw there was a similar thread called “# Farmbot_ext exited 5: :shutdown” but the solution wasn’t published.

I appreciate your help
Jack

I’ll leave the post for now in case it helps someone else. I reset a few times and switched between Ethernet and WiFi. I also checked and reset Ethernet cables and the cables between the Pi and Arduino.

At one point I had some connectivity and was getting an error that the Pi couldn’t talk to the arduino.

So, I replaced the power cable between the Pi and the Arduino (I bought a spare one because voltage used to always read Amber . . later fixed as a software bug).

Eventually I have achieved connectivity again though I wish I could say for sure what the issue was. I’ll see how things play out tomorrow. If all is solid then I’ll close this.

Welcome back @jrwaters. I too am getting my bots back online after a long winter in Chicago. 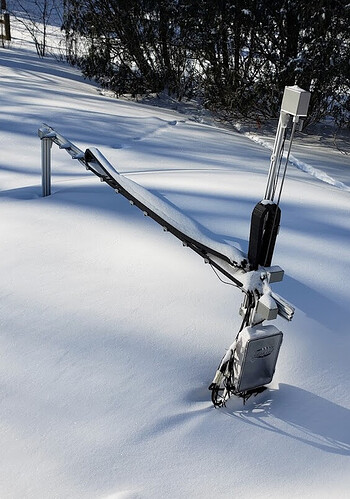 Although I don’t have enough information to know what happened to your bot, I can say with high certainty that it is not a power issue. Most likely, your SD card became corrupted (I would need to see an SD card dump to know for sure).

Glad you got it back online and please let me know if you hit the same issue again.

Great picture - I love that!

I spent some time thinking through it all and I came to the same conclusion. My best theory - in case others see it in the future is that:

Later in the day, I changed my Windows settings to NOT automatically open when a new drive is inserted. I did this because I noticed I had extra Explorer windows open asking me to format my drive. I believe this interfered with the burning process.

So when I reflashed with my updated Autoplay settings (for explorer to do nothing when I insert a USB), I believe I got a clean re-flash.

Hope this helps someone else in the future.

Love the picture.
Were the bearings ok after sitting idle in the cold/damp for so long? I chickened out and removed the gantry for the winter. Perhaps I will leave it on next winter…

My bot is working fine. It’s worth mentioning that I added a graphite spray lubricant coating to all my bearings last fall.

I think it’s worth re-emphasizing do not use liquid lubricants! This seems to only be explicitly mentioned in a troubleshooting section for Why is my FarmBot not moving? (Test the gantry, bullet #4)

Good point @mdingena - for extra clarification, when selecting a spray graphite lubricant, ensure that the bottle clearly states that it leaves the surface dry / non-tacky; not all spray lubricants do this. Testing on a small patch before proceeding is helpful here. If it is still greasy, or causing damage to the plastics- do not proceed and use a different product.