FarmBot not moving, but can take pictures :)

Just noticed this red alert. Any tips to debug this?

We recently upgraded to 3.1.6 - it was moving ok before the upgrade.

Not sure if the messages indicate a problem… 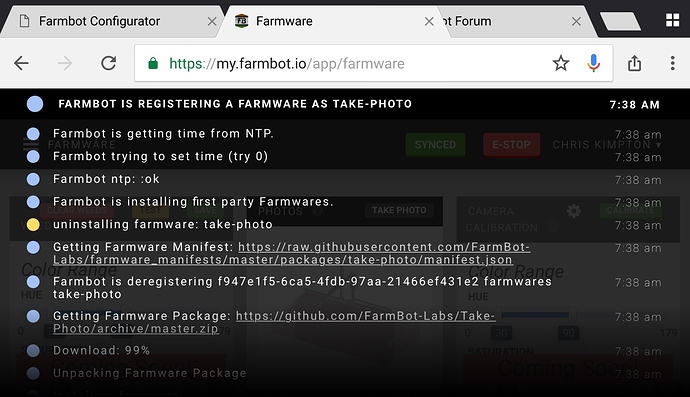 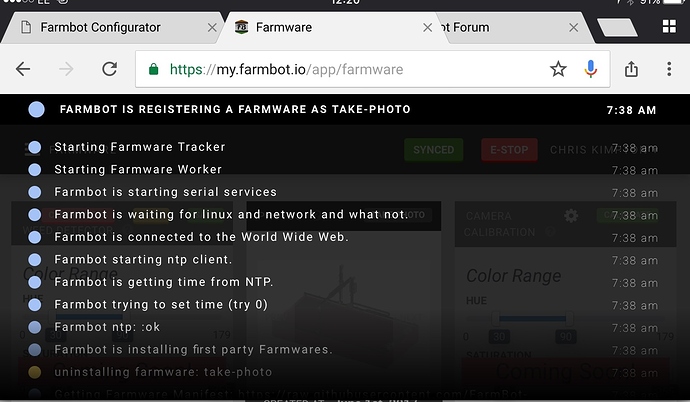 I think we can’t read anything out of the log file since it’s not properly displayed (fix will be there soon).
Did you try to reload the page or relog into your account? For me this “issue” appears only when using my smartphone and try to give commands after waking it up from screen lock. So I reload the page and everything is fine.

I am currently using my phone as a hotspot and tablet to control the app.

I did reload the control page a few times and rebooted the RPI, but no joy.

Sounds like something may be wrong with the Arduino. I would recommend to flash the 3.1.6 to your SD card again. Sometimes the auto update function doesn’t seem to work properly.

Thanks. Tried the factory reset option but seems to do nothing.

Did the factory reset work, so that wifi appeared and you were able to do configuration again?
Or did it stay online with a message like “resetting my Arduino” in the top bar?

In case it didn’t factory reset, your connection between raspberry and Arduino may be interrupted.

Did you try to use a fresh flashed sdcard? When your config is submitted and Arduino gets the firmware flashed, make sure to have an eye on the LEDs on Arduino/ramps. While flashing one led is on/flashing until it’s finished. If this does not turn on your Arduino is not connected.

Since your Arduino worked with 3.1.5 and does not after updating, I assume that something gone wrong softwarewise.

Reset didn’t work - did not even restart.
There was a message about not connected to arduino - before doing the reset. Nothing specific afterwards.
Sorting out a freshly flashed sdcard this weekend (is a 1gb card enough?).
My first time - original card was done for us.
Will check the LED’s when we use it - hopefully Monday - thanks.

Alright, feel free to ask if you have any questions about flashing or something else

Ok - flashed a new SD card with 3.1.6. Put that into the RPi and restarted it. Did not notice the LEDs on the Arduino - maybe covered by some cables - also was away from the FarmBot for some of it.

Still cannot get it to move - but can still take pictures

Any idea how long the first run takes to sort out the Arduino - less than 10 minutes?

Was connected to it via my phone/mobile hotspot. Which seems to work fine - FarmBot visible in the webapp/takes pictures.

The reason why you can make pictures, is that this function is processed by the raspberry itself.

Are you able to toggle switches from the Peripherals widget? Add that Pin 13 and turn it on. You should see the LED on Ramps/Arduino turn on.

After all this sounds like your firmware does not get flashed to arduino. The Firmware flash sequence starts when you click “SUBMIT CONFIGURATION” in your configuration page. I would try to reflash and maybe connect the arduino to a different USB port on your raspberry. Its hard to find out whats wrong with the connection from here.

sadly I’m experiencing the same problem. I just did that Arduino LED test and I’m able to switch the RAMPS LED on and off like that. I also see some lights from the Arduino (underneath the RAMPS shield).

When I booted up for the first time I was able to move the y axis not the other ones though. Therefore I reflashed but after that not even the y axis would move. I also remember that my vacuum pump was on by default on the next boot. I had no idea how to turn it off back then and therefore removed the cables. Now I plugged them in again to see whether I would be able to turn the pump on and off like the LED, but it’s not doing anything and also isn’t on by default anymore.

I already reflashed several times and checked whether the RAMPS board is plugged in correctly (it is). I also changed the USB port to no effect. However I’m able to switch the LED on and off and therefore nothing should be wrong with the connection, right?!

Any ideas what else I could try? I did not turn the voltage screws yet because, as I said, the y axis was responding in the beginning.

Try reversing your encoders under Device - Advanced. I found I had to reverse our decoders to get movement.

Sounds like your Arduino is connected and reacting to your commands, like turn led on/off.
So your connection and firmware should be fine. I would recommend to try what @HighlandGrey advised. Maybe even disable all encoders in the webapp.

We have movement again

Bought a second Pi and Arduino and proved they worked ok, standalone.

Then took off the ramp shield and saw that the faulty arduino shows power, but no RX/TX lights.

Swapped the arduino over and now it works again.

But probably just report it to Farmbot HQ as supplied from there.

Thanks for the help.

Oh right the upload issue. I also had this, or maybe something similar when updating to 3.1.6. After submitting the config the flash began and never stopped. Minutes later the farmbot connected to the webapp and I had no connection to the Arduino. I’ve noticed that the led on ramps didn’t​ turn off after flashing the firmware to Arduino, it just got stuck in the process every time. Uploading the firmware directly to Arduino didn’t work, insufficient space was shown as an error.

So I asked Google and found out a “temporary” fix which worked out pretty decently.
While uploading the firmware to Arduino you need to push the reset button on Arduino just in the right moment. Worked after a few tries and the bug didn’t came up anymore even after many reflashes.

Thanks - sounds like I should be able to recover this arduino then, with some luck on my resets.

And now we can progress with setting up our 'bot.