Hello, I am part of a student team tasked with building a FarmBot Genesis XL for the department of engineering at McNeese State University. The entirety of our build has been largely successful, but we have recently come across a roadblock - the Pi keeps disconnecting from our campus WiFi, and the FarmBot shows the following error: 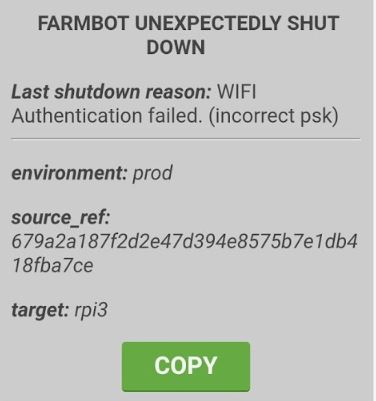 Our system setup is a Genesis XL v1.4 with a Farmduino.

We have a hidden SSID with WPA-PSK set up specifically for applications like this. The system was connected for roughly two weeks before this issue first reared its head. The shutdown reason has remained the same for every disconnect, and we just had disconnect #7 occur yesterday. The interval between each disconnect has gone down sharply from about 14 days between the first two, to 1.5 hours.

I have suspected the WiFi signal strength to be an issue, but running an analyzer in the area showed the signal was steady enough to reliably send and receive packets.

I am currently waiting on a new router, so I can place it right next to the FarmBot and eliminate the possibility that the system is too far from the nearest access point.

I put out this post to see if someone has any ideas on why my FarmBot that was correctly configured at first, keeps thinking it has the wrong WiFi credentials.

What is your update on this?