Before i got any response to the error with ssl certificates during farmware run, this one starts occuring repeatedly. 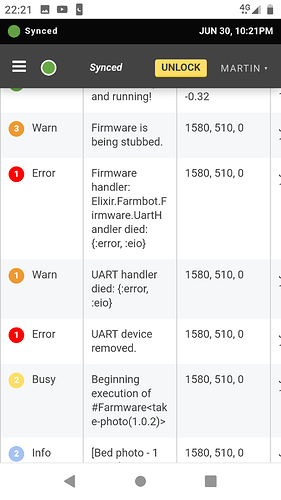 Did you ever get any help/info/resolution to this error?

I was receiving these message too.
I believe that this was a result of something on the Farmduino that became compromised, possibly due to excessive heat. We have had a very hot summer (+38C / +100 F for multiple days).
I am still wip getting solid root cause, but I see other, unrelated fails when I swap out one Farmduino for another.

Same with me. I had these troubles until i came across more serious ones (z axis not moving reliably) as well as farmware not running stable. So i ended up with farmbot that s just not working :-/ right now my issues with movements are really strange, havent had those before and i tried virtually anything including changing drivers, experiment with various microstepping setup.

Unfortunately support was little to none

Is there a way to determine if my farmduino fried itself too? …we definitely had up to 40 celsius this summer here as well…

It looks like this error only comes up when you try to take a photo. The log only says that a UART device disconnected which usually is your usb camera.

Might be caused by a broken usb port or (which is more likely) the usb camera itself.

Does this issue appear all the time? Does it also appear in different actions like turning on peripherals?

Is there a decode for the various errors so we (FarmBot users) can do some debug work?

I am not aware of such a list, and I am pretty sure that it does not exist yet. This kind of errors is pretty rare and sometimes contain additional information which won’t make it easy to write explanations. I think it wouldn’t help that much to have it.