Getting black images from Farmbot

I have some problems when taking pictures with the Farmbot. Sometimes when i take a picture it shows a black image on my.farmbot.io, this happens every few days and lasts for some hours (doesn’t matter how many pictures i take). After these few hours it works perfectly fine again. It happens with both code and my.farmbot.io.

Does anyone know what the problem could be and how to solve it?

Can you share an example of a black image?

These were taken a few day’s ago using the take photo feature on my.farmbot.io. 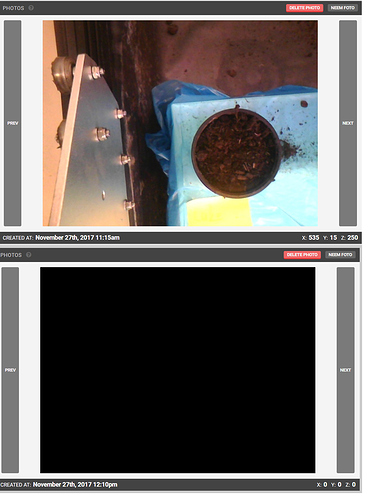 Has anyone have the same problem or found a solution yet?

Have you tried unplugging your camera and plugging it back in?

I am having the same problem. Rebooting or replugging USB helps but I had to reboot every 10-15 pictures. This makes feature unusable.
The only thing I see in the logs is [take-photo] Problem getting image.
v.1.3 software 6.4.0