Having problems with FB express stalls

Please excuse my request for what may be a really simple answer but for the life of me, I can’t figure a workaround for this issue.

Anytime we get a stall on x,y, or z the Farmbot cannot figure out where it is anymore. One instance I encountered today was that the z-axis is really starting to hang up when it is raising. While this is its own issue (per other posts, I am going to try and lubricate the long screw with some graphite) the real big problem is that after getting hung up the Farmbot “thinks” it has moved to the assigned value (to 0 for example). However, it is clearly not at that value. So if the Farmbot was to go to initiate a sequence it is doing so NOT from where it thinks it is but rather from the lower height.

Without stall detection on the Express what sorts of workarounds do we have to make the Farmbot aware that it is not where it thinks it is?

I feel like there is a simple solution to this but I am just missing it.

Any helpful feedback is appreciated.

Anytime we get a stall on x,y, or z the Farmbot cannot figure out where it is anymore

This sounds bad
On the Web App main page, top ribbon, press the [ CONNECTIVITY ] button and post a snip of the popup window ( you can obscure the DeviceID if you wish )

Here ya go. I will say I don’t think this is a connectivity issue. We have had those in the past but things have been running much smoother now. Is there other information on this popup window that I should be keeping an eye on when it comes to the bot tripping up? 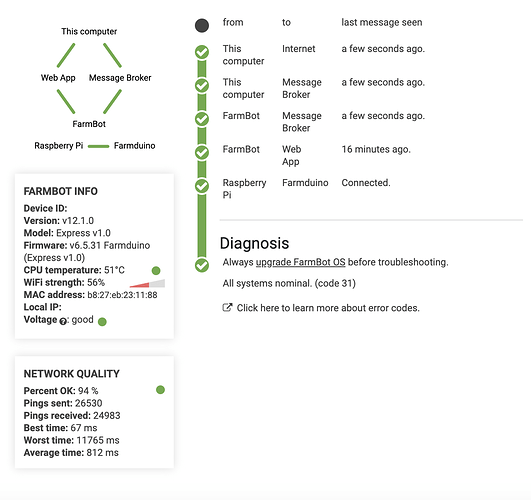 other information on this popup window

Was only making sure that you’ve got the correct firmware for the Farmduino Express and that FBOS and firmware version are latest released . . Correct on both questions

I don’t have a full working Farmbot Express machine, so I can’t reproduce what you’re reporting

Maybe @RickCarlino can say whether or not this is normal behaviour for Express ?

|edit|
WiFi signal strength looks a bit marginal on the low side . . hard to see this relating to position amnesia after an axis stall ! . . |edit| BUT worth boosting WiFi signal to the bot regardless

@Jjarrell That is one of the downfalls of the FarmBot Express system.

There are no rotary encoders on the FarmBot Express system.

The Express model doesn’t have rotary encoders so it does not have the ability to independently determine the position of the Universal Tool Mount (UTM). If there is an error while an action is taking place it stops the sequence and it returns to home.

There are several reasons why the FarmBot Express system is significantly less expensive than the FarmBot Genesis and this is one of them.

This is the NEMA 17 component that is installed on the FarmBot Express system. There is no rotary encoder, so it is reliant on the stall detection in the software.

Thanks Marc.
You mentioned,

“If there is an error while an action is taking place it stops the sequence and it returns to home.”

“There is no rotary encoder, so it is reliant on the stall detection in the software.”

Even though we understand that stall detection is in beta on the Express, we have been fiddling with it. As of yet though we can’t get it to work reliably.

So right now if there is an error our Farmbot does not recognize it and it just keeps on rolling through each of the steps in the sequence. It sounds like this is going to be the case until stall detection is out of beta correct?

it stops the sequence and it returns to home.

Just curious : how reliable is return to home ? If any axis stalls during homing, what happens next ?

@Jjarrell The beta stall detection should be functional and we have several FarmBot Express systems that are fully functional operating 24/7 at the FarmBot HQ. These units are following sequences and they are able to complete every task that we assign them.

Have you changed any of the motor settings from the default values?

That’s awesome you guys have some running smoothly. I have tinkered with motor settings and our Farmbot really moves around the bed pretty efficiently. However, when it comes time to enable stall detection, I haven’t had much success with those motor settings and I am currently back at default. For the stall detection values, (stall sensitivity, max motor load, grace period) I have been sticking with the values mentioned in the post on the forum back in July about the software update.

It seems as if changing up any of the values elicits the same response which is about 2/3 of the requested movement (absolute or relative) being completed in a jerky movement before stall detection stops the rest of the movement from happening.

With regards to sequences, most of the ones we have in place right now are very simple (water a group, scan the bed) so a stall hasn’t been too big a deal. I am more concerned with more complex sequences I have been working on (planting seeds for example) since it requires more movement along all three axes including a trip to the seed trough, movement out to the planting location, then movement to reach soil height. With all those steps stalls would become very troublesome since I would hate to jam the seeder tool into the trough or drop the UTM down in the correct spot/depth.