I have loaded my rpi3 with your software and am working with a sub Mega 2560 and was working with
the configurator to learn in preparation of receipt of my kit in First Week of March. MY school class is planting plants in the window in plastic cups. Not the way I was hoping it was going to happen. You guys are doing something that will have a tremendous impact in this small scale ag. area of Vermont. We have one out of 27 farms in my town still running. In the next town over we are down to three out of 43 still farming. Over 27% of the population is on welfare. The facts go on and on.

after playing for a week a “terms of service” notice shows up. The console doesn’t allow me to continue learning. Please help me not slip further behind. Where do I go to sign terms of service? 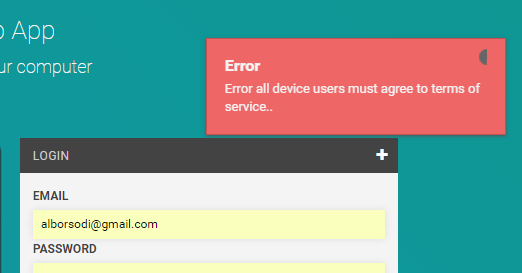 I will take a look right now.

Did you get any other errors when you clicked the button, or was the red popup the only thing that happened?

I just noticed an issue that may affect some users. I am working on a solution now, but have not published a fix yet.

Here is what is happening to some users:

Is it possible that your password is incorrect? If so, that may be preventing you from continuing.

@Albert I have deployed a possible fix.

Can you please do a hard refresh of your browser (ctrl + shift + R) and let me know if the issue is still happening?

I am using the same email and password for the past week.

it just worked… <ctrl,shift,r> done the second time sent me to the terms screen , Which I agreed to.

We just plugged in the drivers to the ramps board to the arduino to the rpi3. We are going to order the power transformer for the ramps board. The question I have as I study for my jr. hi class (I happen to be the teacher??? hi) is how much of the electronics of the Mar. 1 Kit comes configured? Am I studying in the wrong area at this point. I am going to play with small stepper motors and some led’s to get this aspect of the configuration so I can follow directions when the kit arrives.

Next I am going to study the console to see if I can control the stepper motors / led’s.

Hi Albert:
Regarding your last comment, are you considering using a cheap stepper like the 28BYJ-48 ($2.00)? There are several good utube videos to change them from unipolar to bipolar. This stepper is used in cheap 3D printer projects. I was going to start a new thread to discuss how one might prototype a farmbot, about 8" inches by 16" just to see if I can put the whole thing together before buying tons of parts. I have my electronics communicating with my.farmbot.io, I think everything is communicating properly, but without steppers it’s hard to move forward. I believe I understand the pinout wiring to convert the 28BYJ to be able to plug into the ramps board. My concern is the inability to control the current going to the 28BYJ The suggestion I saw somewhere (I am getting older) is that the farmbo,t as set up, currently may burn out the 28BYJ, although I would have assumed that the current supplied would only be what the stepper demanded. I have enough knowledge to be dangerous, but not quite able to get there myself. Any tips would be appreciated. Maybe Rick could chime in on my notion. I am way up north in Canada, so have plenty of time to prototype before I could ever get a shovel into the ground.

We have audio and remote video and finished today with pins 8,9,and 13 with breadboarding led with a 220 ohm resister. This enabled us using the farmbot console, to rp3 to arduino mega 2560 to turn the led’s on / off… We do have the ramps board and motor driver boards. We have ordered the transformer for wednesday delivery.

So I have Microsoft “remote camera” and my email is alborsodi@gmail.com. I can also send pictures of our config. I have the farmbot kit coming and we are working with three ele / jr. hi schools so with four foot snow banks we are also playing with time.

today with the configurator we had a problem with respect to the connection and had to sequence and to repeat connect. I don’t know if it was the 385k connection or my computer (win10) speed or farmbot.io. We will continue to watch. we are running farmbot ver 3.0.5, (controler) and ver 1 of the firmware.