I think I just debugged an encoder/motor problem

The symptom: The X1 motor would randomly just stop. I mean stop dead. No sound. No “pull” or resistance (we have all motors set to “always power”). And then, it would just start! Like everything was fine! After a few of these, the gantry became un-equalized and then things just went out to lunch.

The search for root-cause: I checked cables and belt tension - ok. I checked for debris or obstructions - none. I started to suspect the encoders, drivers and electronics. The first step was to try swapping the stepper driver with the spare 5th. When I removed the X1 driver, this is what I found behind it: 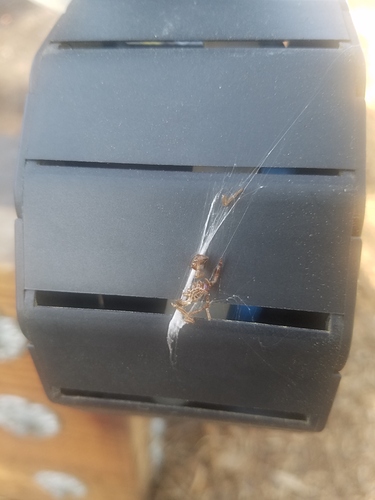 (Sorry, I freaked out, had an “Alien” moment and flicked it out before I took the pic. But it is about as dead and cooked as they come)
I finished the swap and retested.

Debug (literally) report-out: The FarmBot & the X1 motor seem to be doing fine now. I just set in motion a “Water All Plants” sequence, so I will reserve final results until it comes back Home.

Thoughts: The drivers seem to run VERY hot, so my guess is that the spider got behind the driver, set up shop, lived life large until the first time the bot moved, then expired, doing some light but degrading damage on its way out.

I will purchase a few mor spare drivers…

That sounds like the perfect opportunity for super silent TMC drivers

I had a very similar thing, a spider (I believe it was) nested between my mega and ramps board. It ended up in a dead mega and a burned ramps. That was the reason for me to put a fuse between the 12V solar battery and the Farmbot.