Issues with firmware after os 8.2.3 update

i have attempted os update from 7.0.1 to 8.2.3 and apparently have some issue with farmduino firmware.

due to frozen device page, i cannot get to button flash firmware.

How can I reflash firmware? …it used to be part of installation process for clean os install, but it’s not there anymore… 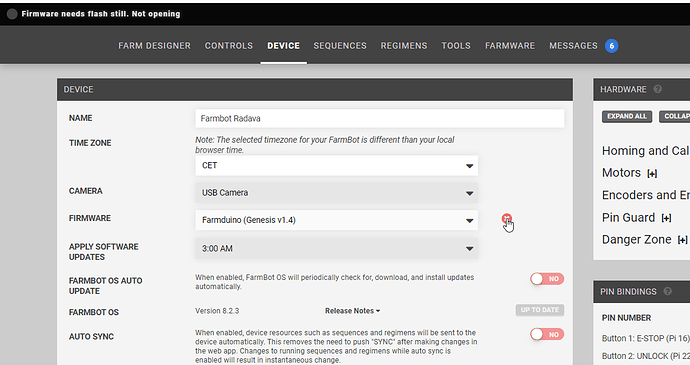 firmware logs repeatedly try some codes, upon which farmbot locks/unlocks itself 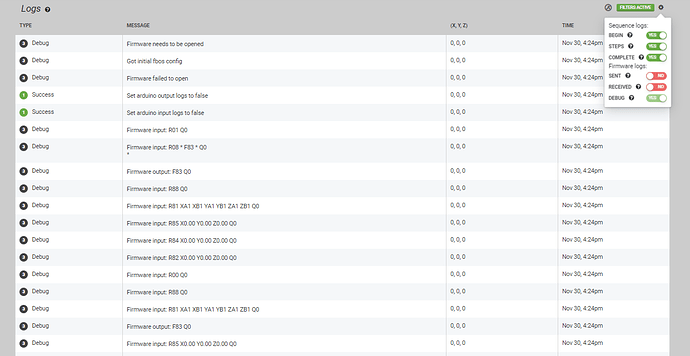 @eide, just offering an “unofficial” solution, as I don’t know whether FarmbotOS upgrade from v7.0.1 to v8.2.3 OTA ( across the net ) is supposed to “just work”.

I suggest grabbing the v8.2.3 .IMG file from here and flashing it onto a known good SDHC card.

MCU Firmware selection ( for your Farmduino v1.4 ) should occur automagically during the boot after you finish the web-based Configuration. The v8.0.0 Release Notes mention this change to firmware handling.

I agree to all what @jsimmonds posted, get the .IMG file from the link that he posted and flash it on your SD card. If you haven’t done that before, follow the short installation guide from github.

due to frozen device page, i cannot get to button flash firmware.

That’s weird, haven’t seen that before. What browser are you using? Are there any error messages in the browser console (F12)?

Thanks for the suggestions. I managed to resolve this before the comments came, but I assume it was only accidental. I have reflashed OS image to SD card version by version. I think I ended up with os version 8.2.0 or so.

I kept trying to click the reflash firmware button - most of time it was either impossible to click or whenever clicked it would say firmware update failed. But - on one random attempt - firmware reflash was successful and voila - farmbot started moving

For the software devs, why are ota updates attempted when there are known problems when jumping from earlier versions?

I had left auto-updates off after running in to the same issue last time I tried to update. I updated after getting the nag screen on the web ui. But again, I end up with a failed update and will need to spend time manually fixing the problem.

Very frustrating and doesn’t inspire a lot of confidence in your update process. There seems to be a fundamental problem in your process that hasn’t been solved in the course of the last year.