Hi Everyone
I had to switch the Arduino boards on the Farmbot (the first one sparked and stopped working) after making the switch the motors stop working.The web app claims the motors have completed their movement but the actual motor itself doesn’t run. The Farmbot is up and running on the web app however, when I try to move the motors they do not rotate. Any suggestions on what the problem could be?

I have the same thing. everything in the app says it’s connected. when i use the manual arrow keys to move things, the app says it’s moving and stops and says it’s completed. it even shows up in the log files as having started and completed, but the motors never move. the red pushbutton light is a solid red and no other pushbutton lights are on. the top led green and blue are solid. when i click the motor arrows in the app, there is a tiny green led light near the bottom of the farmduino that flickers quickly as if the motors are moving and then stops when supposedly the motors stop.

this is my first build and i’ve never had the motors going. i’m on windows 7, 64 bit.

everything seems to work except the motors down turn on. the raspberry seems to talk to the farmduino and farmduino seems to respond, but it’s like the encoder cables and motor cables arent hooked up, but they are, and correctly. this is quite frustrating to get this far and when i’m nearing the end, it doesnt work. please help!

Do you hear any kind of noise or vibration from the motors? This sounds like the motors are not being supplied with energy. Make sure that the Stepper drivers are correctly oriented. I’m not very familiar with the farmduino board, but I would check if the 12V/24V arrive at the input pins and check the small blade fuse right behind that.

yes, i have no movement, no vibrations, and no sound. i concur that juice isnt getting to the motors even though i havent put a meter on them yet or on the drivers. As far as orientation, the drivers seem to be set up exactly as the picture of the farmduino. i dont see a blade fuse where you say, but there might be one down to the lower right with a blue plastic top to it… not sure. attached is a picture of the farmduino in this link: 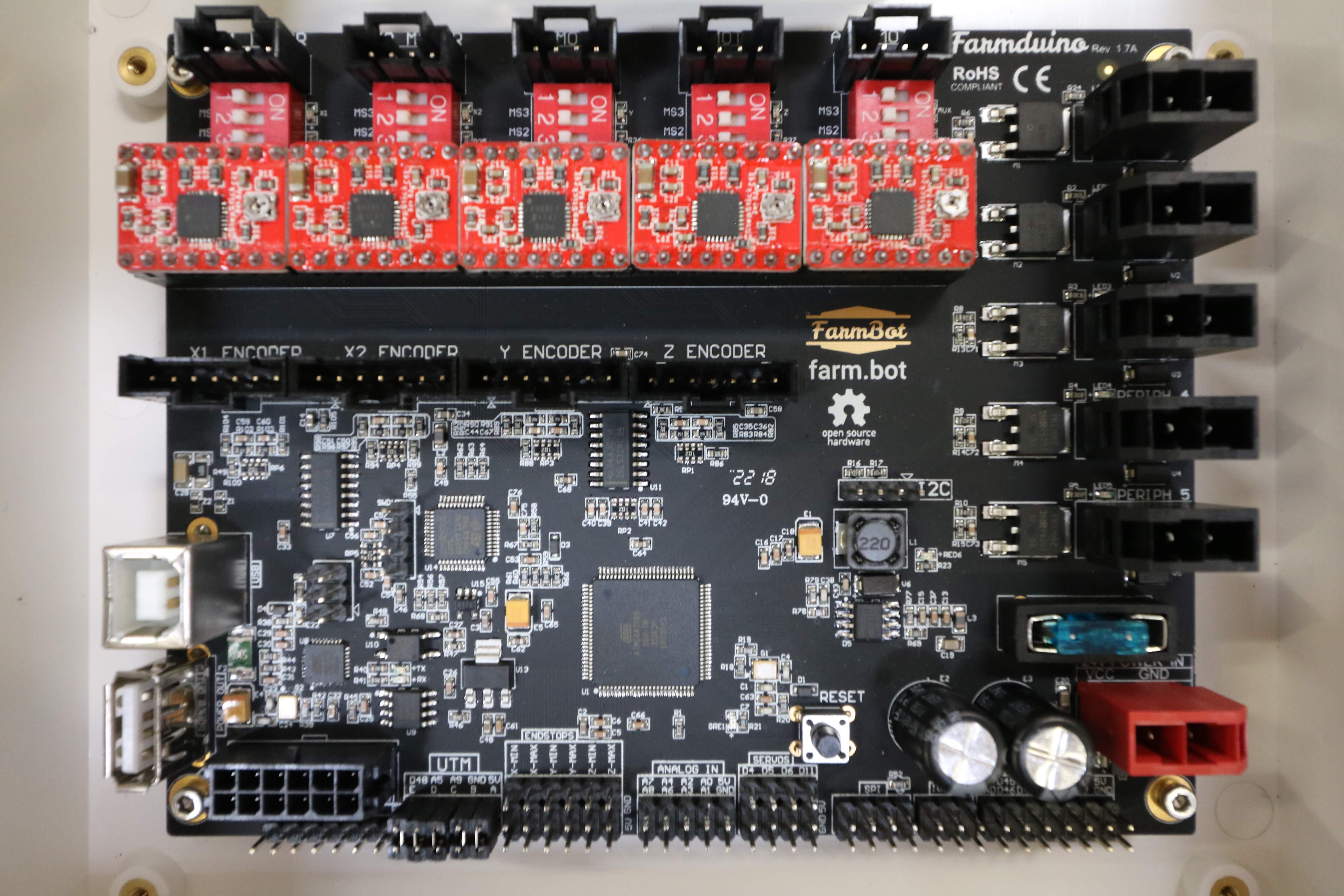 Yes that is the fuse that I meant. I didn’t study the farmduino docs yet so I can’t say how it behaves when this fuse is broken. But that’s a thing that would be worth to check I guess.

ok, i figured it out! everything appears to be working. in the app, go to “Device” and scroll down to where it shows “FIRMWARE”. the app defaults to the arduino operating system (O/S). you need to set it to YOUR control board, in my case “Farmduino 1.4”. there is also a setting for “Farmduino 1.3”. once you do that you are matching up your app with the correct firmware (what’s on the little chip you installed in the raspberry) and they will now work together properly!

thanks for your help!

I have a Genesis 1.2 and cannot get the motors to turn. Checked the firmware and it is correct. Re-checked all of the wiring. When I move the motors by hand, the encoder records the change on the app. Neither X motor, Y motor, or Z motor will move when I send a move command.

Note to anyone hitting issues with movement:

If you purchased an official FarmBot kit from FarmBot, Inc. we provide email support for movement issues via contact@farmbot.io

Please have an order number ready for verification purposes.