Need help how to use sequence

I made the sequence as below and stored it as SEQ-1.

The above sequence works well once.

However, if you combine several SEQ-1s and store them as TEST, they will not work properly.

I’m using latest farmbot-os and arduino firmware.
this is my device setting. 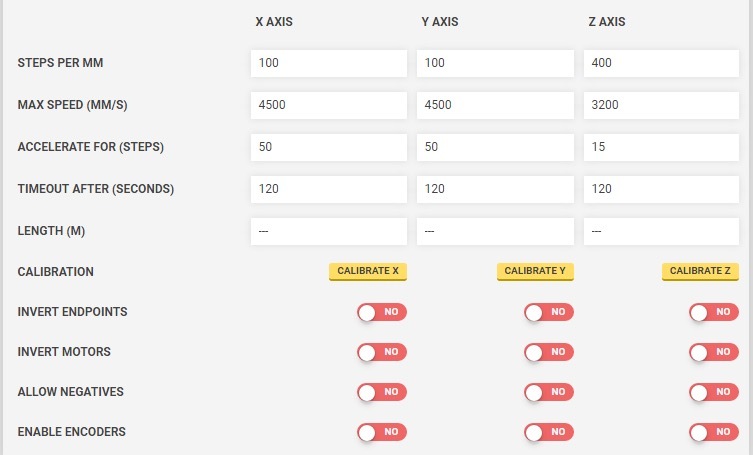 I have a few additional questions:

Which server are you using? Is it my.farmbot.io?
–> Yes, I’m using yours.

You mentioned combining several SEQ-1s. How did you do that? Via Execute Sequence?
–> right

You mentioned that they do not work properly. Does it move at all? Or is it moving, but in an unintended way?
–> farmbot is moving. but the result is unpredictable.

additionaly, though I wrote a post, if there was not z-axis movement it seems everything ok. but if z-axis movement is included in the sequence it cause problem. So I will change to stepper motor for z-axis to another new one. and then I will test again.

Interesting that it only happens with the z-axis. Please let us know how it goes. We are planning on releasing an update to the software in the next week, which may help also.

The X, Y and Z axis are actually handed by the same class in the firmware, so it’s weird that only one axis would cause issues. What exactly happens with “not working properly”? One of the movements are not executed, or the entire sequence doesn’t start? There is no issue when replacing the Z movement with for example an extra X movement?

Rick; I am getting ready for my kit coming in the next couple of weeks. I have the raspberry to arduino to ramps to Led,s on pins 8,9,10.

I can turn on / off the led’s in the control console.

I can’t get Regimens to work using a sequence that is saved. This is my fault in some way.

Is there a white paper giving me examples, (steps) to try so as not to be blind the day my kit arrives?

Is there a chat mode to work with persons with similar curiosity? I notice OpenFarm has a chat but is seldom used. You guys are doing a great job and any suggestions no matter how straight forward will be helpful and appreciated.

Here is the documentation for Regimens: https://software.farmbot.io/docs/regimens Regimens (and more specifically, events) are being actively worked on this week so they may be subject to change in future releases.

We don’t have a chat room anymore. The main motivation behind this decision was that chat rooms made it harder for users to find answers to their questions. The forum ultimately was the better solution for building a base of discussions that are easily searchable and in one place.

Thanks Rick; I will try it out tomorrow. but preferably in a separate discussion thread to make it easier to find for other users with similar questions.

I will try to make this conversations about the Regimens a separate thread.

My controls are working. I use 10,1 to turn on my vacuum pump. A sequence trying to turn on the vacuum pump and turn it off doesn’t run. the code list seems to be the same. any suggestions.

I have tried other sequences. I have turned off the power. I have logged off and reset. Seems as though I don’t have one setting in any of my sequences that I need for any of my switches. 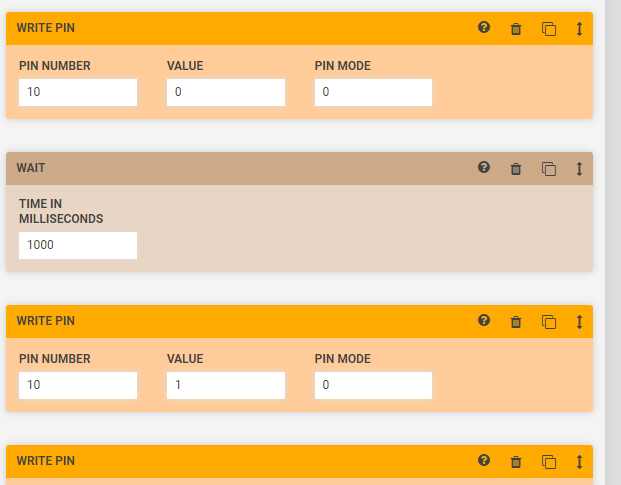 just correct me if I’ve seen anything wrong.
So in your sequence you first turn your Vacuum pump off, then you wait 1s. Now you turn it on and immediately turn it off afterwards (cant see that last write pin command).

Here is how I use it in one of my sequences:

I tried your suggestion. I still have the problem of turning on then off pin 10. 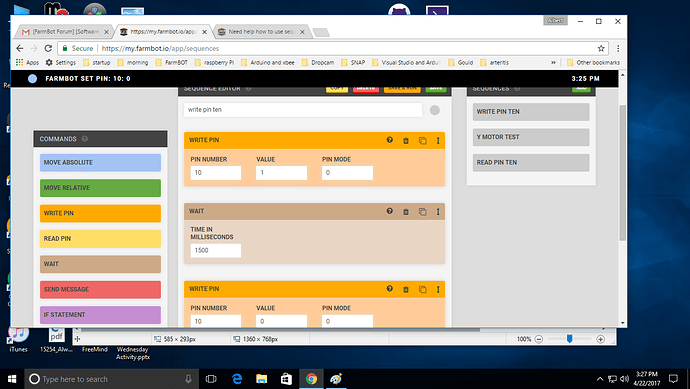 So when you start this sequence, you can immediately see the LED go on, and after 1,5s it does turn off?
Can you set the pin on and off at your Control page?

I just turned all on and off. 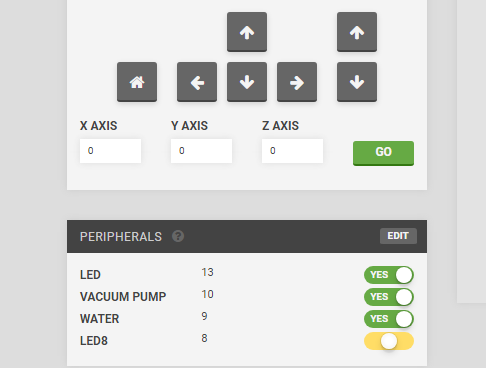 Was there any change on your Arduino/Ramps? So is your vacuum pump only in the Sequencer not working?

Basically, what does your vacuum pump at all? Is it even turning on when you toogle the pin?

the pump makes its noise and the other on / off pins … I can see lights. Led 13 and on arduino board yellow led.

Sounds like it is working. Your pump makes a noise when you turn it on on your webpage and you can turn it off the same way.
So what is not working for you exactly?