On thursday it was the first time my farmbot was running overnight. On friday I disconnected the farmbot because I had to retangle an twist in the driveway pulley. Afterwards the FarmBot did not reconnect.

So I reset the farmbot to factory default and used the FarmBot Configurator to connect again.

I also can not change any settings of the motors and encoders: seems like i get no connection to the arduino: 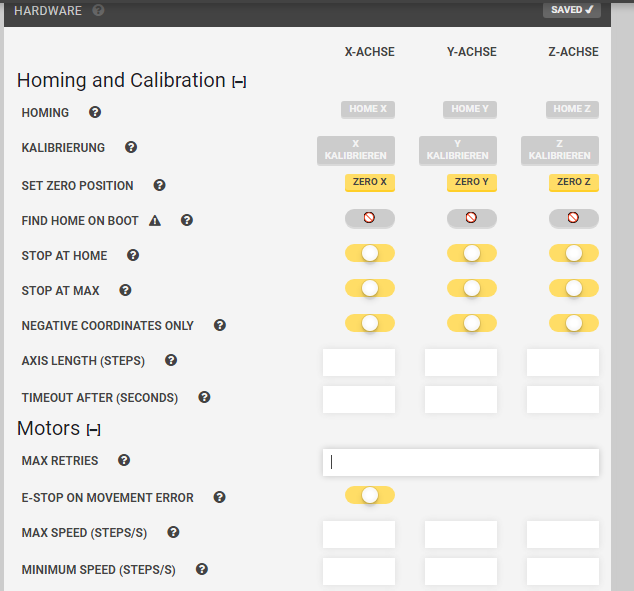 T tried to update to 5.02 but the problem still remained. Afterwards I overwrote the image on the SD-card to 5.01 again, but I still got the problem. I guess it is a hardware issue.

The control lights on the Ramps board and the Arduino are still burning, but am afraid that I have damaged some hardware because the adapter was to hot.

Does somebody have an idea where I should focus to find out where the problem is?

@Gabriel: Could you tell me what the “noproc” error is meaning. Does it mean that there are for to many processes running at the same time?

The :noproc error means that the Arduino is not detected. This could happen for several reasons, including it being unplugged, a wiring problem, or electronics/board issues.

@Gabriel,
Thanks a lot for your response! Next thing I have to do is to check if my Arduino is working.

I also want to say that you are doing great work! I can imagine that the team has so much to do and many deadline which have to be kept. I really enjoy to work with the farmbot and the ideas and principles behind it. Thank you for bringing the project on the way!

The problem was that the arduino was not working anymore. The 5 volt regulator was overheated. I ordered a new one and I will doublecheck the cabelling.

I solved the problem by rearranging the Encoder Cables (The green/yellow and orange/White plugs on the top of the RAMPS). I pulled them out and the position went back to 0/0/0 after rebooting the bot. Then I tried each single encoder cable enabling only the one I tried on the device/encoders-section on the webapp.

I also had to change the position of green and white are on the left side and yellow and orange on the white. (Invert the Encoder on the App has the same effect).