Just finished building our FB v1.5. I’m noticing the FarmBot keeps disconnecting (under connectivity info) and then reconnecting. It’s super quick lasts maybe 10-15 seconds. haven’t been able to determine if it’s only when I move the FarmBot but it doesn’t seem to be.

Any known issues on this?

@Cjaramillogrows We’ve seen this happen a lot when people daisy chain too many routers together (usually because the device is far from an access point). We have not been able to identify a root cause yet unfortunately. Does that sound like your setup? Also, what does your WiFi strength look like?

gotta be that then.

Im at a school so i know they have a lot of different routers around campus and a boat load of AP’s. Sounds like that is the issue. Ever since we got the FarmBot a static IP through the district network I noticed this happened a lot. the WiFi strength is pretty bad. It was in the red but its in the green now with an average of 200ms ping. If I hardline the Farmbot think that will fix it?

@Cjaramillogrows I’ve never seen this happen on an ethernet connection, so it’s possible, assuming that there isn’t some factor other than WiFi at play.

What is the WiFi strength percentage shown on the connectivity widget?

@RickCarlino. Here’s how we’re looking for the WiFi Network.

@Cjaramillogrows How does this one look?

(for reference, 67% is really bad, but my bot is currently buried under ice and snow)

Looks great so far. Been checking it recently with an average of 85% strength.

For what it’s worth, I’ve been noticing this lately as well. My FarmBot is wired and then uses fiber to get back to my main switch so I’m sure there isn’t a network issue

@stre1026 Are you running 13.1.0? Is your network in a school/enterprise setting? Most of the blinking issues were resolved in 13.1, but if it does blink on 13.1, that is a sign that port 8883 might be blocked. That’s the most common issue we’re seeing this month. Port 8883 was previously unused, so if your network has an allow list policy, you may need to update it.

It’s at my house but my home network is kind of like an enterprise network because I’m an IT guy. I’m not blocking any ports though so I doubt that’s the issue.

@stre1026 If you isolate what the configuration issue is, I would be interested to know what it was so that we can help future users. The quick disconnect reconnect has, in my experience been caused by the following issues:

On a stock consumer router with Ethernet, I have never seen the issue come up. When WiFi strength is ruled out, it has always been the result of LAN configuration. I can take a quick look at your logs if you can provide me with your device ID, but we no longer discuss LAN configuration with customers due to the complexity of some LAN setups. A quick way to rule out LAN issues is to run FBOS detached from all peripherals on a different, unrestricted LAN

Noted. I am going to replace the ethernet cable going to the farmbot from my fiber to ethernet converter. I’m wondering if something happened to it over the winter. I’m noticing crazy pings and response times. Hopefully that’s it. As for the network itself, I’m running an off the shelf PFsense firewall with a very basic configuration. Nothing I built myself.

Interesting- so you are noticing high ping loss or extremely high latency in your response times? Please note that I am using “ping” in the FarmBot sense of the word rather than the traditional ICMP Ping, although I would be interested to know what your ICMP pings look like also (FarmBot pings happen at the application layer over MQTT).

Hi @RickCarlino, admittedly, I haven’t tested what my actual ICMP ping is on the local LAN because I generally play with the FarmBot when I’m at work in between doing my actual job

But I do notice the network quality in the FarmBot app is all over the place. Very high latency in the 450+ms range which seems crazy high but I don’t know how that all works in regards to the app.

@RickCarlino is this considered normal in terms of what you’d expect to see? I know on a network, I’d think something is clearly wrong with response times like this: 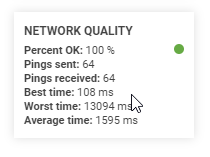 13 seconds seems very high. Here’s a screenshot of mine for reference:

I don’t know enough about your home LAN setup to provide any guidance unfortunately. I would be curious to see what your ping numbers look like if you were to:

Be aware that you will see a red X during this process since the firmware will not be accessible in “headless” mode.

@RickCarlino it’s been raining here so I haven’t been able to replace the cat5 yet, but that’s my first step this weekend if the weather is nice. I’m an IT Director and deal with networks all day long so I’m confident my home LAN is rock solid, but I suspect a bad cable going from the fiber converter in the yard to the FarmBot. I will replace that cable first and then report back.

I’m still seeing these disconnects. I replaced the cat5 cable a while back and I’m getting a solid network connection to the bot. I did some testing with my laptop so I know the network is good. Any ideas?

@stre1026 Those messages will happen even on a very good connection. This happened a few times last night on my XL bot with an excellent WiFi connection, for example:

Ultimately, my FarmBot XL is still able to take care of plants and accept commands from the web app though. No socket connection will be 100% reliable 24/7/365 and these messages are a reflection of that in many cases.

Are you seeing an actual degradation of performance, such as an inability to control the bot? If not, the messages can be ignored or even squelched out by adjusting your log filter settings.

No issues at all with control. I just wanted to make sure it wasn’t a bug. I will ignore it. I am having issues with my Z-Axis, however and I opened another topic on that.