A post was split to a new topic: Encoder wiring connection

thinks ! i know how it work!

5 posts were split to a new topic: Connecting power to the Raspberry Pi

Could you give me a bit more information about this?
I could not figure out how it works with the data labels and the if statement.

Do you have to make your own valid data labels or are the pre made?

I recently heard that there is only a temporary fix right now. In the next patch you will be able to select the desired pin (f.e. pin 59) directly in the IF function.

@RickCarlino Is there a way to use it in the current version (current my.farmbot.io)?

All of the Arduino pins are now available for using in the IF step at my.farmbot.io. See V4.0.0 Software Update for additional details.

I wired a distance sensor which outputs 0 to 5 V to different analog inputs and got a very interesting finding:
As soon as I connect the output of the sensor to one of the analog inputs it gets pulled up to either 3,3 V oder 5 V (power 5V and ground are connected to the ramps shield as well). I measured this inline with a multimeter…

If I disconnect the analog in from the RAMPS it works flawlessly with a multimeter between one RAMPS GND pin and the sensor output… as I tried on the Arduino side I am sure that the signal output cable does not make a short somewhere.

Any ideas so far?

I tried the following pins: 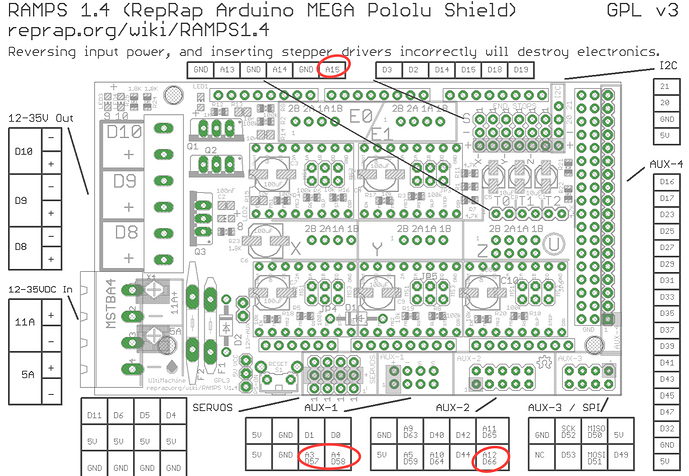 INPUT_PULLUP is used for all input pins to increase reading reliability and attempt to decrease damage due to wiring mishaps. The Aduino digital pin documentation and analog input pin documentation pages have additional information, including “turning on a pullup will affect the values reported by analogRead().”

Why would you need an input configured for analogue operation to have a pullup? It makes no sense at all. But if the Arduino is supposed to be able to read analogue sensors then some input conditioning/scaling/buffering/protection circuit would be expected.

Hi @Gabriel thanks for the fast response. It does not work, as I described in my post.

Makes sense and that it was I get.

@Gabriel: Is there any way to turn off the Input_Pullup? I really do not get which sense it makes for analog inputs other than making some setups of analog measurements impossible?

Hey @Gabriel thanks for the fast reply!

I was wondering how to do that, because I thought the Arduino FW is handled through the Rsp image, right?

Is this the way I need to do it then?

I just updated my Rpi to the latest software, then it got stuck at the updating Arduino firmware stage (I don’t have an Arduino). Have you locked the Rpi software to the Arduino? Do I just need to supply the correct response to the F83 request to pretend my interface is an Arduino in order to avoid the firmware update? Thanks, Jon

And the custom firmware I would need to build through the Arduino tools? Is there anything special about the FB version?

A little bit more guidance would be really helpful, thanks a lot!

@Gabriel would you be so kind to help out? Currently this is holding me back from adding a new feature which is a distance sensor mounted on the z axis and “hard” wired to the Raspbi…

Thanks very much, BR
Klim

Hey Gabriel, at the moment I only would need one analog in without pull up, but it might be good to “erase” another pull up on another analog in. Where they are located on the board does not matter for me…

Please clarify… thanks in advance!

Thanks for clarification again, Gabriel!
Could you please check again if A15 is really not pulling up during the initialisation? I tried again with my distance sensor and as soon as I connect it to A15 it shows 5 V, before (disconnected from A15) it works flawlessly with a Voltmeter…

@Gabriel I really appreciate an answer as it seems that this is still not correctly configured in the initialisation of the firmware!

Those pins are not pulled up in software, but may have hardware pull-up resistors on the RAMPS board.