I have a raspberry pi 3 and a Arduino Mega 2560 with the latest Farmbot OS (10.0.0) and Arduino Firmaware (stable version). I actually don’t have the Farmduino itself. I follow every step in the documentation for a stable setup.
My main problem, is when I try to connect the raspberry to the web app. Sometimes it connects ok ( all green on the connectivity popup) but within 30 seconds the connection between the message broker and the raspberry falls. I’ve tried connecting the raspberry with a Lan cable, wifi from my company, and with a wifi hotspot from my cellphone!

I’m actually running out of options to debug the problem.

Any help will be appreciated.

I’ve been noticed the past week or so that the connectivy between my RPi and my Farmduino is reported as ‘failing’ on the web portal status widget. I’m not getting any errors in the rolling log. Strangely, I haven’t been experiencing any behavior issues with the FB, save a few commands that fail to execute (it’s as if the FB never got the command from the web port). I’m currently experiencing issues with my RPI, so it’s possible that’s why I’m seeing connectivity errors. However, seeing your post about similar experiences makes wonder if something else may be going on. Hopefully that’s helpful to the community as a data point.

Initially I thought it was some problem with the router ports. But when I try to use my phone as a hotspot and the persisted, I thing that the problem is not on the router ports… Let’s hope someone give us some kind of feedback.

More data points. The problem persists (no functional issues though). Effectively, the connection widget reports that the Farmduino is disconnected. However, all commands appear to work and there are no errors in the log that I can find. See below. @RickCarlino, feel free to ping my Farmbot for any info you need. 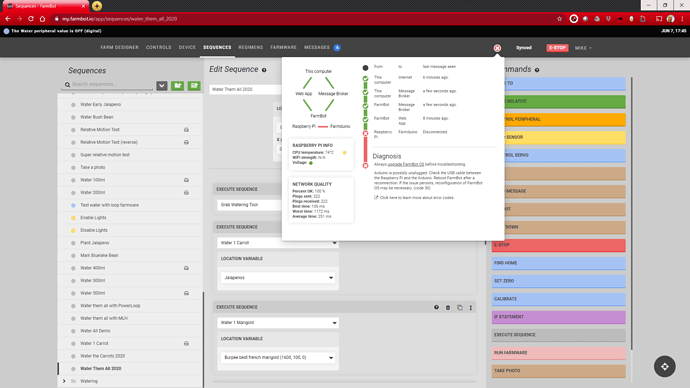 Thanks @fuzzynickel I will take a look. We’re actively investigating an issue related to this. It may be stemming from a similar issue that other users have reported this week.

This may help as a workaround Genesis Farmduino v1.5 config for FBOS 9.2.2 or it may not.

@fuzzynickel Do you still have the problem after upgrading to FBOS v10.1.2? We’ve noticed one source of problems that led to a code 30 error and have applied a fix in 10.1.2. I can continue investigating if you are still having problems. Please let me know.

I saw this behavior, does the web app still work however can you jog the Farmbot on the controls page or run sequences from it?

Yes, I have full control over the Farmbot. Direct commands and sequences. It’s presenting the code 30 as a form of false positive, I think.

@fuzzynickel I will take a look tomorrow when I am in the office near my device. Thanks for the update.