I’m using a raspberry pi 3b+ but that wasn’t a problem lately.

Can you try rebooting and trying again? I think your device may be disconnected from the update server for some reason.

Raspberry pi 3b+ should not cause any issues.

Those logs you see are from the legacy updater so they can mostly be ignored. Those are for an emergency backup.

Can you try rebooting and trying again? I think your device may be disconnected from the update server for some reason.

Tried rebooting for a few times, does not seem to work. It was working in the previous versions, so I’ll check my network settings and maybe even flash different versions to find out if something changed on my side.

Sorry, I thought i responded to this. Can you tell me the node name of your farmbot? it can be found on the Device panel on the frontend.

I reflashed the SD card and noticed while configurating, that my 5Ghz WiFi wasn’t working properly anymore and always crashed while connecting. So I connected to 2.4Ghz and updated to v7.0.0. One of those seem to have fixed the issue for me.
Here is the node name if it still helps you in any way: 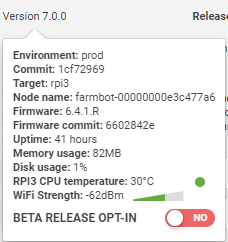