I’ve been reading the forums for a while now, and a question that comes up repeatedly is a request to have Farmbot work on much longer tracks/gardens, and the response mentions the difficulty in having Farmbot carry the weight of the hoses and cables. I personally want to build a Farmbot, but the garden bed I’d like to use it on will be roughly 65 feet long, inside the greenhouse I’m building this summer, and I’ve been trying to come up with an idea to make that feasible.

I think maybe I have that idea.

In many commercial greenhouses, instead of dragging a hose all over the greenhouse, they have an overhead line with the hose hanging from multiple wheeled carriers. The hose is extremely easy to drag along that line, with barely any weight at all. However, the weight would likely be more than the farmbot can pull by itself, so my idea was to have a motor at either end of the line, and a wire running the length of the track, which would pull the hose back and forth along the track in line with the farmbot itself. That way, those motors are doing all the dragging, and the Farmbot itself uses no additional weight.

What do you all think? Could this be done fairly easily?

I’ve attached the only photo I could find that shows what I mean, though I think with the version I’m thinking of, I’d want the line the hose hangs from to be C-Channel or something more solid, so it doesn’t droop in the middle. 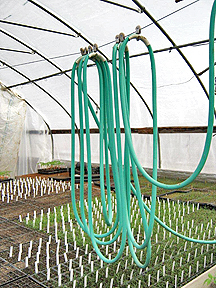 I think that idea is very feasible, though it will of course take someone to build a prototype to ultimately find out. I think avoiding the droop with some rigid structure would be important so that the motor(s) never needs to pull the hosing uphill, as that could make it much more difficult. Depends on the motor torque though, of course.

Do you imagine FarmBot’s electronics driving the motors or simply sending a signal to another set of drive electronics?

Unfortunately I know very little in regards to electronics and such, though I hope to learn much more over the coming year. I wouldn’t know what would be the best option in that regard. I’d want the Farmbot to have enough control over the motors that they ensure the hose stays directly in line with the Farmbot gantry.

Personally, I’ll be installing a farmbot into the pit greenhouse I’m digging out this summer, and would hang the C-Channel from the ceiling joists to maintain rigidity. For those not using one overhead, I could imagine setting something up similarily that hangs the hose and drags it just to the side of the farmbot, using the same methods.

I have the idea, and I think it’ll work, but of course, if anyone else wants to test it, I’d be happy to see it in action. I love the idea of Farmbot, and if we can do things that’ll extend its abilities, I think it’ll just continue to grow in popularity.

Directly from my mind: what about thinking of having water supply lines openly installed like the ancient people in Rome?

What is the translation for Aquädukt?
Such you could only suck it from the open pipe wherever you are on the track and would not mess around with hose lengths…?

You know, an aquaduct is actually not a bad idea at all… That would certainly save on motors and overhead track and such… You’d just need a pump on the Farmbot…

See, brainstorming isn’t a bad idea at all