I do have again the problems that my WiFi disconnects from time to time. This is quite annoying, but the FarmBot Team does nothing to it at the moment (which could be to include a longer reconnect trial of the software)…

Therefore I started my own (very limited) investigations and I guess as I am more or less the only one having those problems, I might search on the Raspi side. I tried two AP, both have the statistical disconnect phenomenon.

I cannot believe that the Raspi WiFi is not able to make it through the back of the plastic housing, through my window and through a very light curtain with 7 m distance at max… Did anyone have those connectivity issues before? See a screenshot of the moment of disconnection below. If I compare this with the strength of my PC, that is quite low… We’ve got many networks around here, but then the PC would have problems as well. I haven’t had any disconnects with it so far… 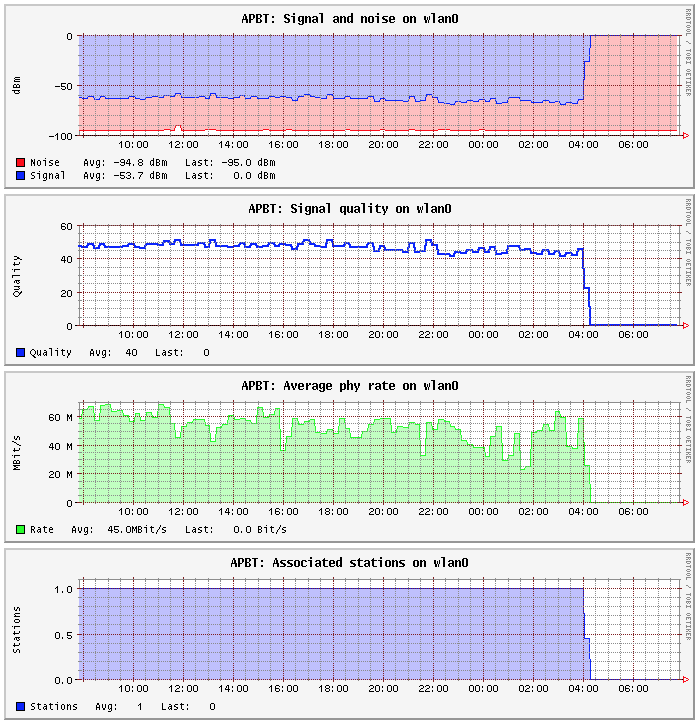 What band are you running your access point in? 2 or 5 GHz?

Signal strength is a function of distance, power and interference. Especially the WiFi bands (2.4 GHz and 5 GHz) suffer greatly from interference, simply because there are many devices nowadays operating in this spectrum.

The way radio signals work, 2.4 GHz has longer range and better penetration than 5 GHz, but the latter is much less saturated with devices, so you might have better results switching to 5 GHz (if your networking equipment supports it).

You can try switching to a different channel with less interference within the band.

You might be able to resolve the problem by using a repeating access point, which is placed halfway between the RasPi and your AP. Although a distance of 7 meters shouldn’t cause so much problems in terms of distance between those two.

@mdingena all good and well what you`re saying but for sure I will not put a repeater in between a line of sight 7m wifi distance!!! That needs to work, no discussion!

Is there any other way to test the Raspis WiFi interface in order to see if there´s a bug in?

Edit says: Btw the Raspi only supports 2,4 GHz by default, so no possibility to try 5 without buying stuff…

Honestly I’d drop a standard Raspberian image on the Pi and check the WiFi performance with it. Should it work fine, that would eliminate everything except the FarmbotOS as the cause.

And then do what with it? Any recommendations how to test the performance in terms of signal strength or the like?

One fairly simple method of checking signal quality is to do a long-running ping test.

Have a look at this article:

Although the Raspberry Pi comes only with an Ethernet port, it can also connect to WiFi. All it needs is a WiFi USB dongle and some simple configurations.

Another useful guide for the Pi:
https://www.rhydolabz.com/wiki/?p=15366

Everything would be the same except the WiFi is integrated rather than a dongle. It shows up the same and the UI is the same. You should be able to scan, get signal strength and test connections. If everything works on raspberian, then the problem is in FarmBotOS. If not, there may be something wrong with the Pi hardware.

So, I’d setup a flash card with Raspberian, connect a display/keyboard/mouse to the Pi and use the “desktop” version of the guide (half way down the page) if it was me. You could use command line version if you’d rather. A second flash card is not very expensive and might come in handy for this sort of debugging since the Pi’s standard OS is a full blown linux environment so you can do this sort of thing with ease.

Did you improve something in the last code(s) (5.0.3?) @Gabriel ? I haven´t had a single interrupt since two weeks now…