A question for the developers (or any mechanical engineers out there); what was the rationale for placing the X axis motors at the top of the gantry?

I’ve just moved one of my motors to the bottom (see pic) and anecdotally the movement is heaps better (no stuttering). Admittedly, I’ll need to run some more tests and probably move the other side to match, but I’d welcome some feedback before I do that.

Intuitively, it seems that the mechanical force is acting where the motor is (partly, also where the pulley is at the bottom of the gantry when the belt slack/elasticity has been removed), so having the force act at all at the bottom seems better than splitting it between the top and the bottom? 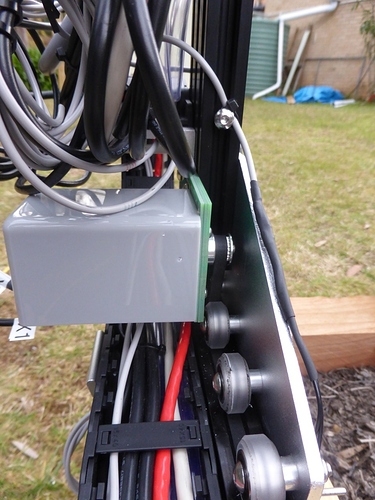 a timing belt is not supposed to be elastic

what was the rationale for placing the X axis motors at the top of the gantry?

Before version 1.1 of FarmBot, the design included a driveshaft which was located along the cross-slide beam. The driveshaft was removed in favor of a second X-Axis motor, but the motors remained in the same location.

Ah, that would make sense then, thanks for that bit of history.

I might pursue this avenue and make some aluminium support plates and do both X motors, it’s not as if I can’t revert to the original design if it’s not as good as it initially appears.

It should be similar.
I’d keep the drive pulley in between the v-wheels and ensure the cables tied back and the carrier lays out flat

A post was merged into an existing topic: Buying Motors for FarmBot