I’ve never had any trouble with my z axis whatsoever. Just this afternoon the z axis is starting to act funny. During upward acceleration, it aborts, retries, and eventually stops.

I tried to slow the axis down a bit, but that does not seem to help.

I’m thankful for any suggestions, and I’m also a little frustrated.

I was the same your problems. I delete immediately sequence after that i created a new sequence and ran this sequence. Your error will be disappeared. I ask also farmbot’s staff about that problem.

Looking into this some more, it seems that I have a little bit of corrosion going on here on my lead screw. 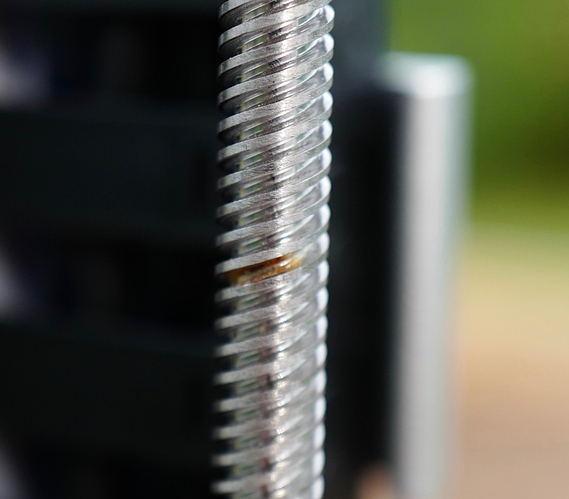 This is exactly where the axis gets stuck during upward movement.

I feel like this can’t be right. Not only is the screw is supposed to be stainless, but also my bot has barely been outside for more than two weeks. @roryaronson Could it be that this one is defective?

I feel like this can’t be right. Not only is the screw is supposed to be stainless, but also my bot has barely been outside for more than two weeks.

I does not need to be from the lead screw what you are seeing on the picture. Who says that this is from the screw itself? Could be Flugrost as we call it in german, don`t know to what it translates to, flash rust!!! I guess that potentially many little pieces of iron/steel could have fallen onto that long screw during the assembly process, or even before in the manufacturing chain…

Did you try the gold old WD40?

I agree. Probably debris. Shoot it with some WD40 to clean it up.

On the other hand, if the z-axis motor is stalling on that, you might not have enough power going to the z-axis motor. There are guides on tuning the output power of your motor controllers.