Hi farmbot team,
(I use the old arduno/Ramps electronics.)
As discussed in other threads, the pullup resistors on analog inputs do not make much sense and tend to make trouble with new tools (capacitive soil moisture, distance, etc.). In the webapp under “control/sensors” there is already the option “digital”, “analog”.
I suggest introducing “analog no pullup”. There is a G Code Command to switch off pullups in arduino firmware. Therefore this feature would be implemented straight forward, I think. It would solve compiling custom arduino firmware to get rid of the pullup temporariliy, as suggested in another thread.

Greetings and thanks for the great work,
Georg (qurzschluss)

I encountered this problem a few years ago and agreed to the proposal, thanks!

My Soil Sensor work abnormal when I use the Farmbot Arduino v4.0.0 **UART command “F42 P5 M1” --> always return “R41 V987 Q0” After I traced it and found below code in farmbot_arduino_controller.cpp pinMode(UTM_D, INPUT_PULLUP); I remove it and the Soil Sensor return value is correctly. Is it a bug? Thanks! FBTUG(Taiwan)

Hi @qurzschluss this seems like a reasonable feature request. I have added it to our issue tracker: https://github.com/FarmBot/Farmbot-Web-App/issues/1677

Please note that it may be a while before this feature is implemented, as we’re having a hectic 2020.

In the meantime, there is also a Set Pin IO Mode Farmware available to change pin pullup behavior from a sequence or the web app.

Hi Gabriel,
It cannot be used since farmware was removed, can Lua functions add set_pin_io_mode()?

@JoeHou I can add this to a new release for you to try. I can’t do an official release because we need to do QA and update documentation first, but it is available as a pre-release on the FarmBot OS releases page

An example of the API is shown below:

Would this meet your needs?

Please try it out and let me know if it works for you. I’m happy to make updates to the Lua sandbox as needed to accommodate the needs of former Farmware authors (with some limitations).

Hi RickCarlino,
Awesome!! thank you very much for your quick reply, this is the feature I want, everything is working fine in the test function so far!!! 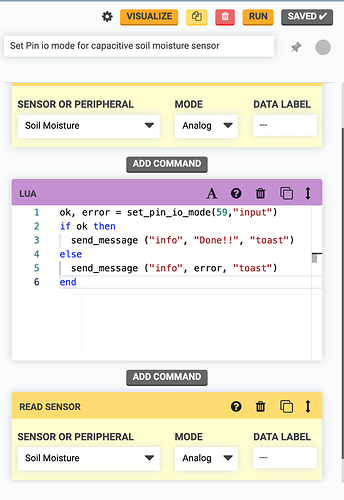