I’m wondering about alignment and compliance. The metal tracks are going to be mounted on a wood platform. Wood is not stable. It moves around, shrinks, expands, and warps, with time and moisture (read much more about this in Hoadley’s “Understanding Wood”). That means that no matter how careful you are to align the two tracks, they’re going to go out of alignment.

So I’m thinking that the trolley needs a feature it seems to be missing at first glance. The top corner away from the electronics should not be rigid, but instead have a hinge. This hinge should be oriented with its pin parallel to the tracks. This hinge allows the tracks to not be parallel in the X-Y plane. It allows for some compliance as the trolley moves along the tracks.

The hinge should probably be made using ball bearing, so there is no play. You don’t want any play with these big moment arms.

Great point. So far in my testing, this hasn’t been an issue. I built my raised beds out of pretty thick, quality wood. And there are posts going into the ground every 1.5m. So warping, etc has not been an issue in the last two years. Plus, the nature of the aluminum extrusions is that they are not perfectly rigid. The whole gantry can actually flex probably up to 1 or 2cm just fine.

Out of this experience, I think building some solid supporting infrastructure and periodically (once per year?) checking the alignment is a pretty good solution.

Having the hinge wouldn’t be a silver bullet either - that would mean that one or both of the gantry columns would not be vertical. This in itself would cause issues with the wheels’ interface with the tracks. For a truly “compliant” system, there would need to be multiple points of flexibility.

One could also not use wood for supporting infrastructure. You could just stick metal stakes in the ground and attach the tracks directly to those. Assuming the stakes are in deep enough (.5+ meters?) then the stakes will likely not move very much relative to each other.

And the metal stakes could include alignment screws. Although, if you’re going to go there, you could do that with the wood mounting just as easily. And wood doesn’t shift much along its length, so if the metal rails are mounted at wood cross points, and the middle weight-bearing points are just (say) hex lag screws into the wood, you would get practically no movement at all.

Sounds like one way or the other, we’ve got this one in the bag.

One other thought would be to re-design the rail mounts on at least one side to allow for slight lateral adjustment. I am thinking some piece or section that can allow one to move the rail left or right a very slight amount, like maybe an inch or three. This would allow for dialing in perfect alignment and also to compensate for over-time drift in the rail substructure.
Just thoughts…

And now that I think about it…
FarmBot Folks (@roryaronson @Gabriel @connor ) could we get the tolerance specs for the amount of lateral diff in the rails as well as the amount of slope in the rails, please?
I understand that we should strive for perfection, but it would be good to know what we can get away with.

We haven’t done testing to determine the tolerance the machines will accommodate. It would be very difficult to make any such recommendations/specifications because of how many factors are at play (eccentric spacer adjustment, temperature, flexibility of joints as assembled, flexibility of supporting infrastructure, FarmBot weight, stepper driver tuning/power delivery, belt tension, cleanliness of the extrusions, exact FarmBot model, location along an axis, wind, etc).

That all being said, my recommendation is that every FarmBot installer should strive to give their bot as much “distance” from the limit as possible because that will translate into greater reliability, especially when the bot is confronted with less controllable factors like dirt and temperature. Giving “distance” starts with well constructed supporting infrastructure. If poor track alignment eats into most of that distance from the onset, then everything else is going to have to be close to ideal for the bot to work reliably. If the tracks are well aligned, it affords the bot more wiggle room with other factors later down the line.

Yes, this helps greatly. I really appreciate the time you took to give a very informative and well-formed answer.
I think this wraps up my question very well!
Thank you!
~Tony

@Gabriel & @roryaronson
What is the “MAX” depth the Z-Axis can go down to?
The reason I ask is because we are going to add a 2"x4" frame to place on top of the raised bed in order to level the bed. We are low to the tune of 5" on one end.
Our thought is to add a frame of 2"x4" and elevate as needed in order to get the mounting for the brackets to level.
This could introduce as much as 9" of height above the edge of the box as it sits in its un-level state at this point. (5" for the MAX un-level-ness + 4" for the added 2"x4" frame)
If we raise the height and mount the rails to this frame structure, will FarmBot’s Z-Axis still be able reach the soil and do its things?

I am adding an excel sheet that I created to show how un-level our bed is.
All arrows point down (slope).
If this is within tolerance, we can just move to brackets…
Plot layout Level scratch.xlsx (12.8 KB)

Here is a pic: 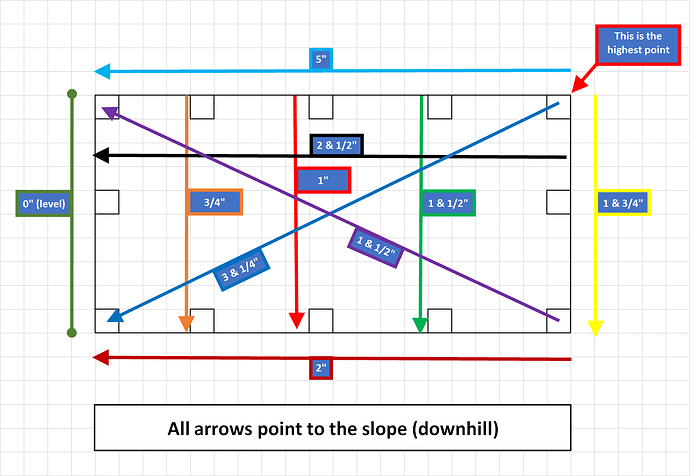 My apologies for the very slow response on this one. Given those dimensions, your z-axis would most likely not reach the soil to properly put seeds in the ground. I recommend adding additional wood to fill any gaps between your 2"x4" frame and the original bed, and then fill the new bed+frame completely up with soil.