Today we deployed a huge new update to FarmBot OS and the web app that many of you have been waiting for. Let’s get started!

At long last, you can now create dynamic groups of plants, weeds, points, or even slots based on FILTERS. As your garden changes over time, FarmBot will use the filters to always calculate the current group members. For example, you can make a group with all of your Spinach and Broccoli Plants, and as you harvest some and sow new seeds, the group will always stay updated according to your filter. 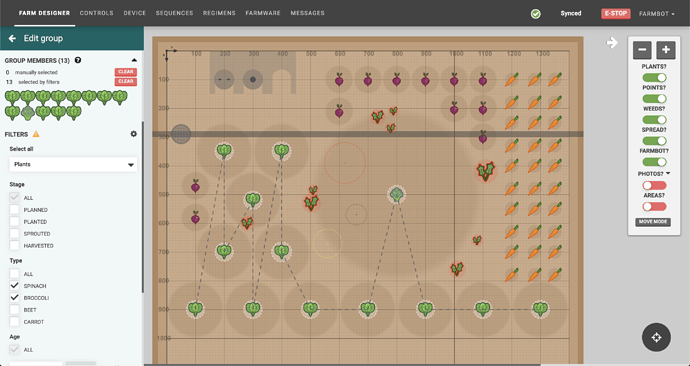 You could also set up a weeding group and sequence that works on all weeds currently identified in the garden. 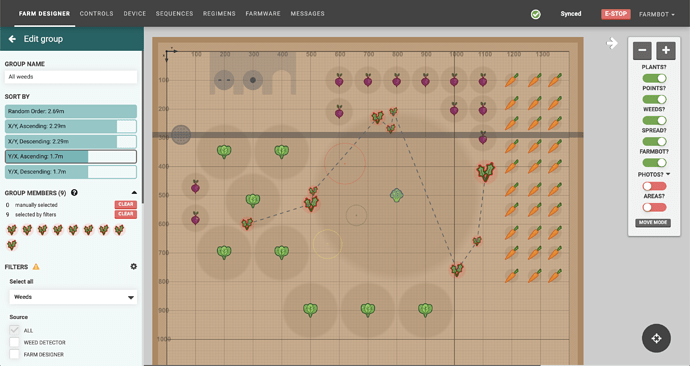 Filter options include (when applicable) object type, plant stage, crop, size, source, slot direction, location, age, and color. Power users may also use an advanced mode providing full access to meta.custom_properties. For a fuller explanation of how everything works, please refer to our updated software documentation.

This feature has been a long time in the making and we thank all of you for your patience in getting here. Huge congratulations and gratitude to @Gabriel and @RickCarlino for their herculean effort getting this out to you all

We also thank the farmware developers who made viable alternatives in the interim and through their efforts, guided us on ours. We look forward to seeing how this can make your time configuring FarmBot faster, smarter, less effort to maintain, and overall a more enjoyable and fun experience!

As you may have already seen in the screenshots above, weeds now have a special icon in the map and are now rendered more similarly to plants. The weeds panel has also been updated accordingly.

In addition to the major features above, we made the following other improvements since the last release: