Base frame for X-axis rails

I’ve noticed that my bot has had a hard time this year moving around the X-axis. The latest firmware fixed a lot of the problems, but I believe my raised bed is the real culprit. It’s warping and I think it’s enough to cause the bot to jam even though I can move the bot freely along the rails. I have an idea which I think will fix the issue but I wanted some input to see if I’m going to run into any problems I’m not thinking of.

I purchased 1/8 inch thick, 1 inch square aluminum tubing that I am planning on brazing together (I don’t have a welder) in a rectangle the exact size as my raised bed. I will then mount the rails to this. The idea is that this won’t expand and contract and hopefully keep the rails perfectly parallel. I was thinking of mounting this whole thing to the top of my raised bed making sure it’s level.

Does anyone see any problems with this plan or have a better idea before I start so I don’t waste $170 worth of tubing?

@stre1026 For summer, Al has a rather high linear thermal coefficient of expansion

I was wondering about that. Do you think it would be any different than the aluminum v-slot?

Unless the X motor tuning is too “conservative” I don’t see that being a factor. Sounds more like belt tension, maybe . . or something else that happens when the gantry is in motion.

I invite others with “real” bots to jump in to help you. ( I only use the electronics box to play with a.t.m. )

@stre1026 My bot was working very well before winter but like you, the start of the season proved really difficult with many stalls on the X-Axis.

After too many hours of fruitless attempts at realigning rails, playing with belt tension, loosening wheels, etc., my problem turned out to be really simple: The wheels aged badly (see picture).

Changing them solved about 95% of my problems. Could something similar be happening at your end? 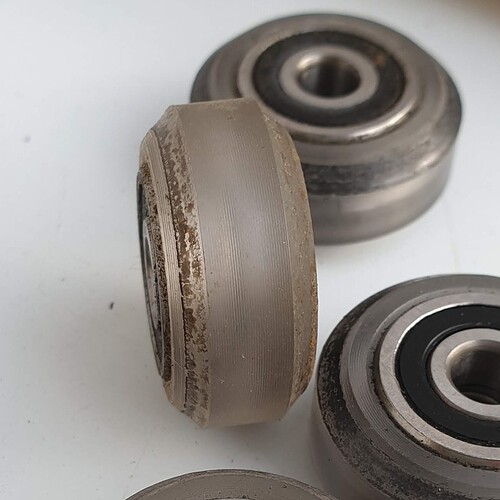 My wheels do look similar. I guess I can try to change them, though that is an expensive test. I will most likely try and build the base frame as the raised bed is warping quite a bit and I already purchased the aluminum and it’s not returnable. I used cheap pine to build it so I’m not surprised.

I guess that you could probably save a bit of money by only replacing those wheels that are absolutely required (see this diagram that @Marc posted about a year ago): 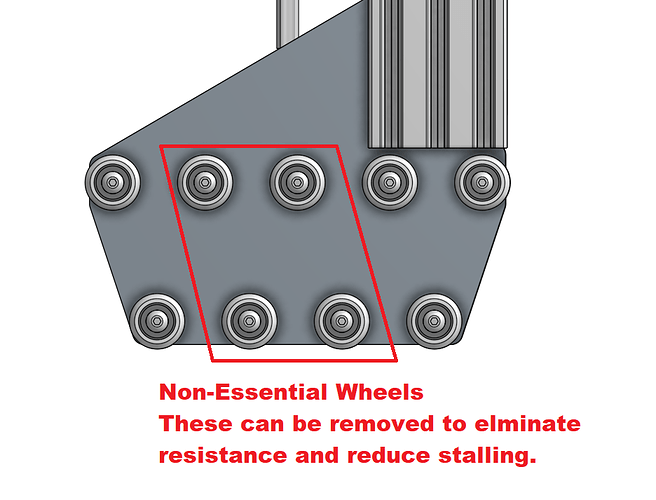