Bot does not connect / Open ports

Rory; I have installed the IMG for 6.4.11 and am having trouble connecting and notice that others are having simular problems. I also notice that when downloading the console we are going to two links Https://my farm.bot/app/device and https://My.farmbot.io/console/app/controls. I also see that at times I get two different downloads. One an error page and another the console page.

Could there be a difference between the versions of the console in different directories. The ver. number on my console is 0840c420 and on a second console the version number is blank.

On shut down / the following time I run the console I get a DNS error report.

thanks for your time.

what is the cloud ? connection http://my.farm.bot or something else plaese.

what is the server name so as the open ports on the router for return packets?

@Albert
Could you provide any images of what you are meaning? 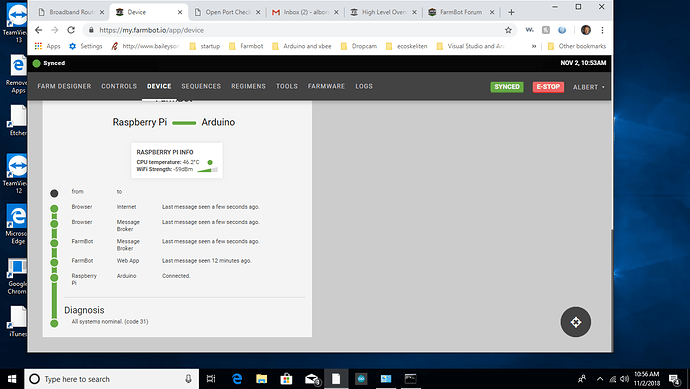 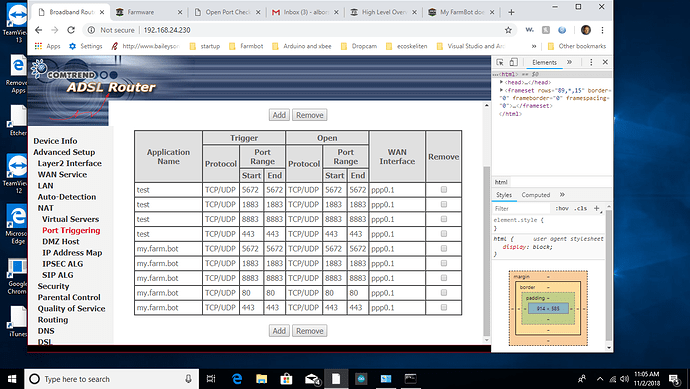 Alright, could you describe whats not working exactly? Looks like your Bot is online and ready to operate.

right side of screen: 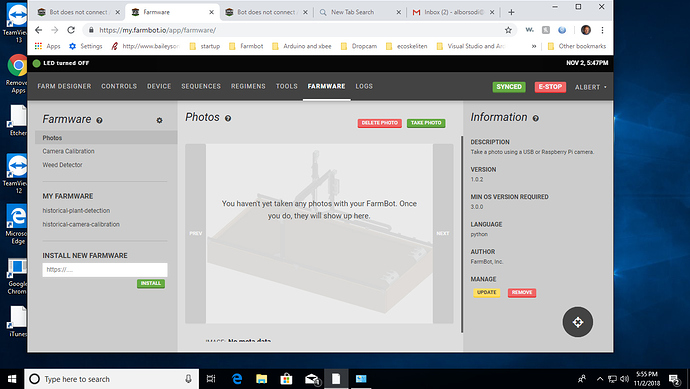 Alright, I guess I didn’t understand it completely but I’ll try my best. I assume that you are referring to the information part of the “Take photo” farmware like this:

part just shows the version of the farmware itself. 1.0.2 is up to date and completely fine.

field shows the required FarmBotOS version to run this farmware, but since you are higher than 3.0.0 its completely fine for you.

FYI: You can see your Arduino version in your device widget as seen in the Image below. 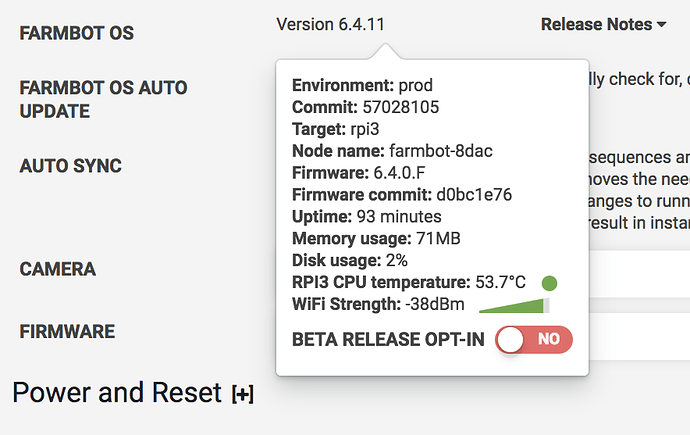 So I guess this won’t be your problem. Could you describe what exactly is not working? Do you get any error messages? Please add photos if you have.

I have been working with Albert and the problem has turned out to be “BLOCKED PORTS “ due to advanced router configuration settings. The ports were forced open and the Farmbot was able to connect.

However we got connected (everything green on the Connectivity widget) but we changed one setting on the motor settings and pressed update and the Farmbot disconnected and it wouldn’t reconnect.

Is there a proper procedure for updating settings? Do you press “update” and then “Sync” ?

When should you press the “Check again “ button on the Connectivity widget?

How long should you wait after pressing the buttons and wait for a response?

@Ascend Over the phone, Albert and I have attempted to invert the Z axis motor. This is a screenshot directly after the attempt. The Rasberry PI Disconnects from the Arduino board and it gives a Code 30 message. Do we need to restart the Farmbot in order for the inversion z axis motor change to take effect? 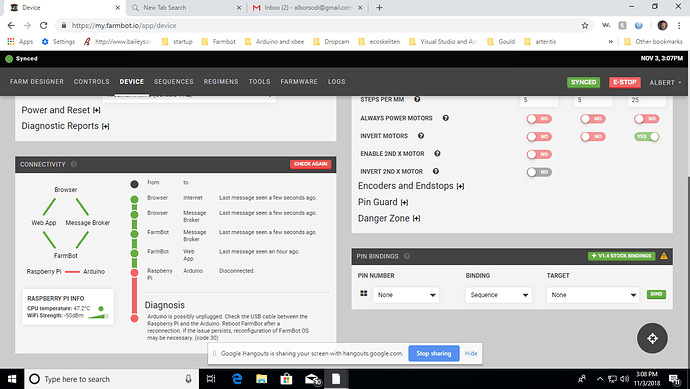 Can you see anything in the logs? It would also help to activate the firmware logs in log settings -> 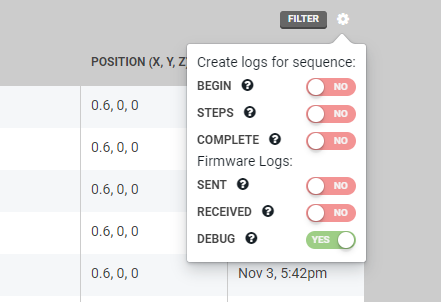 Do we need to restart the Farmbot in order for the inversion z axis motor change to take effect?

No the changes should instantly finish. Something goes wrong when the OS tries to communicate with the arduino.

To your earlier questions:

Is there a proper procedure for updating settings? Do you press “update” and then “Sync” ?

Setting that are affecting the Arduino are updated instantly after you pressed the toggle switch or changed a value. So you wouldn’t even need to hit the SYNC Button.

When should you press the “Check again “ button on the Connectivity widget?

If something went wrong and you see one of those points being red you can hit that CHECK AGAIN button. This Connectivity widget is only for visualization of the bots state and does not have any direct influence on the bots functionality.

How long should you wait after pressing the buttons and wait for a response?

Usually it should take like 2-5 sec. Depends on your connection but should not take longer than 10 sec.

However we got connected (everything green on the Connectivity widget) but we changed one setting on the motor settings and pressed update and the Farmbot disconnected and it wouldn’t reconnect.

Where did you hit that UPDATE button? If you hit the one in the device tab, the bot went down to install the newest OS version. That’s usually finished in a few minutes. If this process takes longer than 20 minutes you should check if the bot opened the configuration WiFi (maybe because of an error whild updating). If there is no configuration WiFi and the bot is still down, I would recommend to reboot the bot. If this also fails you should flash the SD card with the newest FarmbotOS.