I seem to be having a problem with my camera’s orientation. It worked perfectly last year when I was running my own server for the web app. This year, I’m using Farmbot’s servers so I’m getting everything configured again. The camera will not take pictures correctly. When I calibrate the camera with the card, the calibration goes perfectly. However, any picture I take after that doesn’t show up in the map and the reason is “the size does not match match camera calibration”.

I would like to use the highest resolution but that’s where I seem to have trouble. If I leave the camera on the 640x480 resolution, it works, but the rotation is way off and the scale appears to be off as well. I know I can change the camera rotation in software, but I want to move it physically in the bracket. My question is, what orientation should the camera be at when looking at the output in a laptop? Where should the FarmBot’s origin be in the image? It appears that camera almost needs to be in portrait vs. landscape. Right now, the origin is the top-left of the image if I look at the camera live when connected to a laptop.

@stre1026 A customer brought this issue to our attention earlier this month. We are still gathering information to determine the root cause, but we’ve found that using a specified resolution (rather than the “MAXIMUM” setting) can help. It appears to only happen to certain aspect ratios/resolutions. 640x480 is the resolution we test against, but you may find that setting it to the second-highest or highest resolution (but not MAXIMUM) may yield better results at a higher resolution than the default.

I tried MAXIMUM, then I went back to 640x480 and noticed it certainly faired better, but the rotation is still off. It has to be set to ~ -88 for it to look right and even then the scale seems off. I didn’t have these problems when I was running the software locally and I haven’t touched the camera. I may try and rotate the camera physically in the bracket to get the rotation to be 0. But what I’m trying to figure out is what should the orientation of the image be when looking at it live on a laptop?

@stre1026 The orientation shouldn’t matter, but it should be square with the garden bed if you want to get the maximum usage out of the camera (this is adjusted on our end in the software). Have you re-run calibration this growing season?

Also as a side note, if you change resolution, you must re-run calibration.

@RickCarlino It’s definitely square with the bed, but the photos show in the wrong orientation even if I try to adjust them. I cleared the config and will try to calibrate again tonight with the 640x480 resolution and I’ll post screenshots to show you what I mean.

Hi @RickCarlino, here’s an example of what happens. No matter how much I play with the “Origin Location In Image” option, I can’t get the image to lay on the garden correctly. In the picture, my toolbay is vertical, but in reality, it’s actually horizontal right there. I must be missing something?

@stre1026 Can you try this and send me a screenshot? 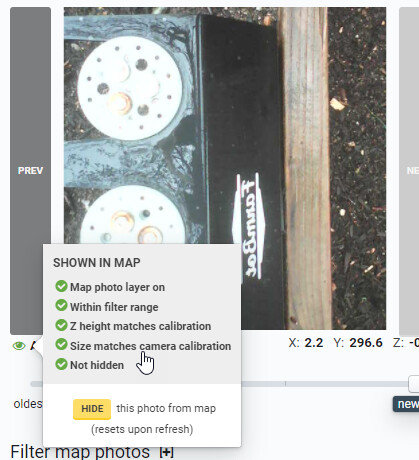