At long last, you can now organize your sequences into folders up to three levels deep. This makes finding and editing the right sequence much easier, especially for power users with many sequences, or schools and businesses sharing one FarmBot among many users. 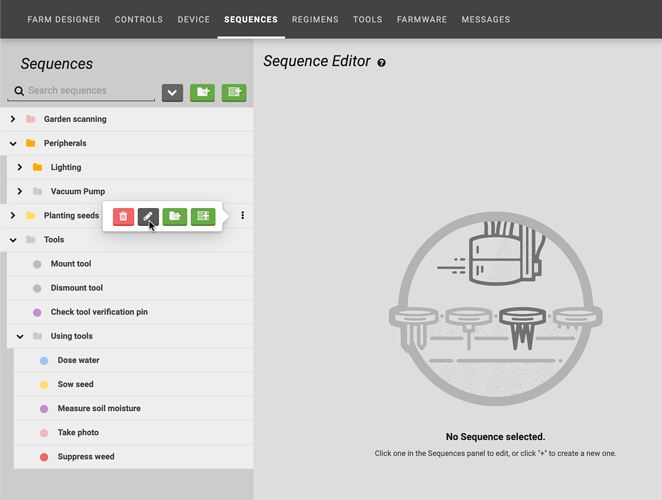 After dragging out a bulk-selection box in the farm designer, you can now click individual plants in the map to add or remove them from the selection before you take an action. This makes it much faster to cherry-pick plants that don’t fall within one selection box.

FarmBot OS v9 and a farewell

You might be thinking that that’s not much of a change to warrant a major version bump, and you would be right looking at only the source code. The real change is that our team member and the lead embedded systems engineer behind FarmBot OS, @Connor, has decided to move on from FarmBot to pursue new opportunities in his software career.

Bumping to version 9 is nothing more than a symbolic milestone of the tremendous amount of work that Connor has put into our operating system over the last few years.

I am personally very grateful to have worked with Connor since 2016, and am very proud of the contributions he’s made for FarmBot and the open-source community at-large. Best of luck in your new endeavors Connor! We’ll miss you

Hope you get a holiday at some stage @connor. Thank you for all the ground breaking software, definitely deserves a new send off version!

Thanks for all these nice updates! These news about Connor made me pretty sad, but I wish him all the best for the future. Thanks for all those great contributions that pushed the project forward.