For automated seeding it seems to be important to detect if a seed actually was picked up. Is there a way to detect this?

Currently there is not. It is theoretically possible to perform this via image classification tools, but that would require development of third party software (eg: not possible via the sequence editor of today). As FarmBot is still a new project with a small staff of 2 engineers, it’s not something we’ve had time to tackle directly yet, though there is no reason why the hardware couldn’t support such a feature in a future release of FBOS.

Our recommendation for now is to use pelleted seed (commonly used in agricultural machinery) since it is specifically built to be handled by a machine. For things like lettuce, this is nearly a hard requirement due to the seed’s irregular shape. Users will often put more than one seed per hole also, which is a common practice for many gardeners, even outside of FarmBot.

I just so happened to have some pelleted romaine lettuce sitting on my desk. It has been a good choice for seeding in the past: 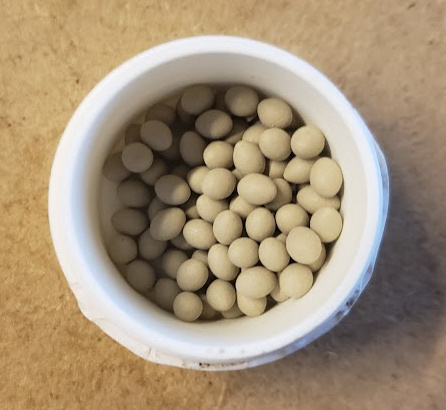 @jensGeorgsen I just got off our daily team call. It appears I missed some details about the v1.5 hardware. v1.5 electronics have current sensors on all peripherals. For seed detection, this means that we have hardware that supports load detection on the vacuum pump. This means it is possible for us to add seed detection in a future firmware version. We have not yet started work on the feature, but v1.5 hardware supports it and it can be added to the app via software updates.

Hej @RickCarlino, if the seed can be detected by the vaccum pump itself, that would be best and simplest. Image recognition sounds very complex to me compared to the problem. My idea would have been to measure the pressure in the vacuum tube, connecting a pressure sensor via a T-connector. Adafruit has a nice breakout board called “3965”. Not to push you more than the limits of politeness allow, but do you have an estimate about when you would start implementing to read the relevant current sensor?

In the tests I ran, image classification systems were surprisingly accurate and easy to train so it’s absolutely something we still have our eyes on. I will pass a note along to the team about your ideas with the 3965 breakout board, as I am not directly involved with hardware designs. As I understand, some internal tests were conducted with the current hardware and seed detection appears to be feasible via sampling.

If you are interested in conducting your own experiments with the sensor you have mentioned, I’d be happy to offer advice on how to integrate with existing software.

do you have an estimate about when you would start implementing to read the relevant current sensor?

Unfortunately not, as it is incredibly difficult to give estimates more than a few months out with a team of only two software developers. With that being said, our focus for the next 6 months is to continue building out stability fixes and then focus on increasing the usefulness of weed detection so it is unlikely to happen during this year’s growing season, assuming you are located in the northern hemisphere. Balancing priorities is difficult, and the current priorities were chosen based on feedback from forum users plus the realities of our team size.

@RickCarlino is the current sensor output accessible via the API yet?

@whitecaps Not yet, which is one of the reasons we don’t mention it much. The hardware is there though, if any developers are curious.