There are a lot of little things throughout the assembly instructions that make assembly painstakingly longer than it should be - definitely a lot longer than the advertised ‘1 hour’ assembly time. I will give some examples here. I know some of these things may seem ‘duh’ to those with more experience working with FarmBot, but for new users this is not obvious.

There should be a list naming each part and visually showing what it looks like (ideally included in the box). I lost count of how many times I read the next step in the instructions and then fumbled around in the box trying to figure out what part it was talking about.

Another one was the screws - a simple labeling sticker on their bags could have saved time measuring to figure out what screws it was talking about. And since most English tape measures don’t include metric, that also involves an online search to figure out what the conversion rate is. This may seem trivial, but the time adds up. (I realize the metric system is nice for designing from the ground up in a CAD program, but most U.S. users aren’t great at estimating with metric like they can with English. And since construction, such as building the raised bed, is based on the English system - e.g. nominal wood dimensions - we are going to have to live with both. All that to say either the individual screw bags should be labeled with their size or the instructions should offer the same information in English units.) I understand if you disagree with me on this specific point, but if so, then please update the ‘1 hour’ assembly time to something more reasonable for a general consumer. Even if I knew all the part names and had practice assembling the kit I seriously doubt I could have finished in just an hour.

Regarding the installation of the cross-slide and z-axis:

When I went to put this piece on, the tool head would hit against the side of the garden bed. It took me quite a while to realize that I could manually twist the motor to get the tool head to raise up high enough so I could slide the cross-slide/z-axis on the main gantry.

Another example - see this post about a problem with the dowel pins. This problem alone took hours to resolve.

Another problem is the lack of paper instructions included in the kit. I realize that FarmBot is intended to have good Wi-Fi access and therefore wherever a user might be assembling it should also have good Wi-Fi access. But trying to read the instructions off a little phone screen or laptop (which I would prefer to not take outside at all) in sunlight is difficult to say the least. A project this big really should include a paper copy of the manual.

Thanks for considering these (hopefully helpful) criticisms. I am still excited to start using FarmBot, but was pretty disillusioned when putting it together. I think the biggest problem here was the advertising. If I had been told there was a lot of work and troubleshooting in order just to get the FarmBot installed, this wouldn’t have been as big of an issue. But I was led to expect an easy, straightforward setup. It may get there in the future, but it just isn’t there today.

I agree with most points (especially labelling the screw bags, which I’m 100% sure they used to do, at least for my Genesis kit).

A project this big really should include a paper copy of the manual.

You see, this is where you might be contradicting yourself. You are asking to change documentation, yet you want a hard copy. The real benefit of an online copy is that the community can easily change and redistribute it to users. When you start making hard copies you lose that major benefit, and you are wasting a good amount of trees as well.

Thanks for the feedback @Jon. I will be providing this feedback to the rest of the team for future revisions of the documentation.

Thank you for the feedback @Jon. I have just updated the Express documentation to address the issues you brought up.

I hear you on the paper manual request, but as @mdingena pointed out, perhaps the biggest benefit to online-only documentation is that it can be updated as soon as we receive feedback like yours. From here on out all future Express v1.0 users will benefit from these improvements rather than referring to an outdated printed document!

Again, thank you for the feedback!

You see, this is where you might be contradicting yourself. You are asking to change documentation, yet you want a hard copy.

I understand your point, but I would say a hard copy is still warranted. Don’t get me wrong, as a software developer myself I 100% agree with the benefits you have described. There can always be disclaimers about more up to date information being available online. But in the big picture the frequency of required changes to documentation for a consumer product is or ought to be almost never, unless the product itself is expected to regularly change.

For example, if we were talking about a software application like the FarmBot web app then yes, I agree, because as a cloud-hosted product it is subjected to frequent updates and changes. When talking about the self-hosted version of the app, the updates will be less frequent, but a portable, hard copy of the entire documentation should be available in the medium most conducive to that environment so that the setup can always be re-created (since the customer is managing the deployment and configuration). In the case of self-hosted server software, an electronic medium such as a PDF is sufficient. Similarly, in the case of hardware purchased and installed on a customer site, the customer would also need to be able to retain the portable hard copy of the documentation for initially building it, future reference, and to include it with the hardware if they should no longer use it themselves. And, since this is built outdoors in sunlight, etc., the most effective and useful medium would be paper in my opinion. I would consider providing something like this with the kit to be a common courtesy, but I would at least consider offering a full PDF download of the documentation for each purchaser.

Regardless, I understand the benefits from the management side and am just relating my own experience with the setup so far.

I have just updated the Express documentation to address the issues you brought up.

Thank you very much! I appreciate the updates.

Future versions of the kits will not include dowel pins but instead extra long nut bars, which is a superior design that is easier to work with and not susceptible to the same level of manufacturing tolerance issues.

Any chance I can get some of those longer nut bars? I was just noticing today that the middle of the gantry seems to be pulling apart somewhat even though I securely fastened the gantry joining bracket with the 8 screws. 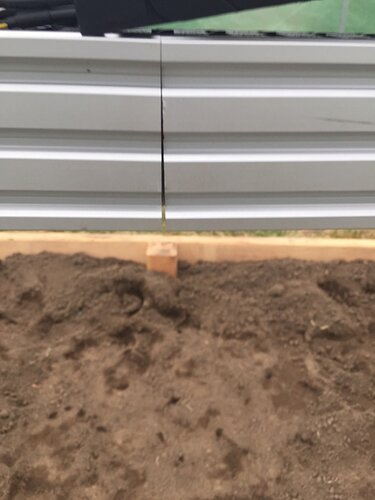 But in the big picture the frequency of required changes to documentation for a consumer product is or ought to be almost never, unless the product itself is expected to regularly change.

You’ve bought a product as an early adopter, you should definitely expect FarmBot to change frequently. A lot of progress has been made in the last 6 years or so but fact is that it’s still an “in development” thing.

You’ve bought a product as an early adopter, you should definitely expect FarmBot to change frequently. A lot of progress has been made in the last 6 years or so but fact is that it’s still an “in development” thing.

There are two problems with this. One, FarmBot is absolutely being advertised as a usable, well-built consumer product, complete with return on investment estimates. Just because there may be additional features under development for future versions does not change the fact that kits are being sold today under the impression not of beta testing or early adoption for technical folks, but of normal usability for anyone with the basic skills needed to put it together and operate it.

Two, purchased kits do not change. FarmBot is not going to ship me new parts every time they update the hardware. Pretty much the only time it would be appropriate to expect a change of a purchased product is e.g. in the case of a recall or other significant defect.

Any chance I can get some of those longer nut bars?

I’ll have them sent your way on our next shipping day. You should have received an email with the order information.

FarmBot is absolutely being advertised as a usable, well-built consumer product, complete with return on investment estimates.

It is usable, well-built, and yields results. But it’s not a finished product. Anyone willing to shell out a couple thousand dollars for a product should look a bit further than just the marketing front page. I urge any prospective buyers reading this thread: you’re doing the right thing. Keep reading and learning and become confident with the state of this product. It’s an ongoing development. The fact they’ve been able to keep developing for years is probably a good indication that they’re on to something, and are able to keep afloat with our support. Just know that even if the marketing is slick, it’s going to be a bumpy ride! Get ready to embrace your inner hacker / maker.

Disclaimer: I am a community moderator. I am not a FarmBot employee.

I’ll have them sent your way on our next shipping day. You should have received an email with the order information.

Got the email. Thank you so much!