When FarmEvents total > 9000 the Erlang VM stops and crashes.
The console output and the /etc/erlinit.config suggest that I should find a dump file at /root/crash.dump but I never do ! 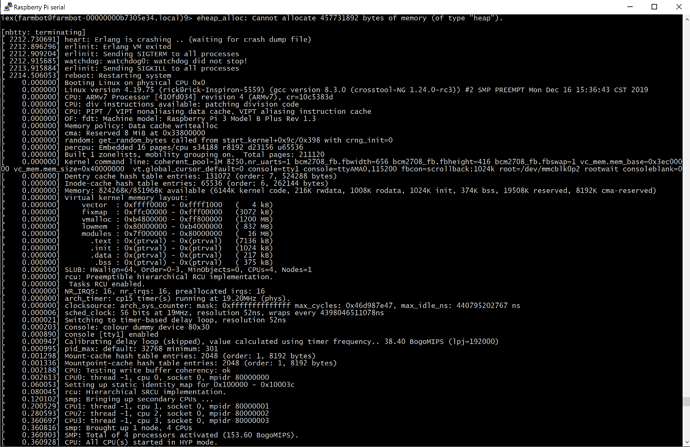 I think the Erlang doc tells me why

Need to add ERL_CRASH_DUMP_SECONDS=-1 to /etc/erlinit.config for env.
For now, I’ll do this on my private FBOS build and will not raise any issue or feature_request

Just curious ( @RickCarlino ) what the expected max for total Farm Events is spec’ed at ?

Slowly realized that the change has to happen in farmbot_system_rpi3/blob/master/rootfs_overlay/etc/erlinit.config

@RickCarlino any chance you could add that env item to the next release of farmbot_system_rpi3 ?

By “calibrate” I am assuming you were just running a theoretical benchmark, correct? Or are you trying to accomplish a real-world use case? Can you tell me more about the FarmEvent you were trying to use? Was it that you created 9,000 FarmEvents in the database (

), or you created a FarmEvent that had 9,000 points of execution? I like to evaluate bugs on a severity:likelihood scale, and although this is high in severity, it seems low in likelihood. If I am understanding the issue correctly, it might be better to set limits on this resource, which currently has few unlike logs or points.

The long-term “forever” solution to this is to re-write the FarmEvent data structures to use lazy evaluation. Right now, the system is already pretty strained with relation to event scheduling, to the point that some parts of the FarmEvent handlers had to be written in C (never a good sign). It’s been a while since I’ve had to look at that part of the codebase, though and I may need to re-visit to refresh my memory.

I’d be more in favor of setting a limit elsewhere in the stack rather than putting more fuel on the fire for performance issues, especially now that RPi0 devices are deployed. We’ve done similar things for points and logs.

If you really need this feature I can take a deeper look. I think I might not be understanding the situation entirely.

expected max for total Farm Events is spec’ed at ?

Usually we wait for events like this to happen before we set hard limits, although you may have shown there is a need. Some of the limits were set here: https://software.farm.bot/v9/docs/account-limitations

Thanks for your expansive and considered response.

By “calibrate” I am assuming you were just running a theoretical benchmark, correct?

Correct. Initially 2 different short Sequences, each repeating every 5 minutes across a 16 day interval.

How did the web app perform under these conditions?

Didn’t miss a beat or raise a sweat and tallied the entire interleaved sequences correctly.

I like to evaluate bugs on a severity:likelihood scale

but only to report that the Erlang VM crash dump ( that I want to examine ) is not getting written. That’s likely due to the BEAM env missing that ERL_CRASH_DUMP_SECONDS=-1 item.
I appreciate that you probably don’t want the little RPi0 recording dumps, but the RPi3B+ wouldn’t be fussed.

Yes, I noticed Scheduler usage sitting around 14% for many many minutes ( most time spent in various Calendar.ISO functions ).
It seems likely that the FarmbotCeleryScript.Scheduler process is the one that blows its :total_heap_size.

Some of the limits were set here: https://software.farm.bot/v9/docs/account-limitations

For now, please don’t worry too much about this topic !

I’ll report back after I’m able to get a crash.dump file that I can analyze.

Ah, sorry for any confusion @jsimmonds! As always, we appreciate your help in debugging. I will put the ERL_CRASH_DUMP_SECONDS=-1 on my TODO list for the next time that I need to update the Nerves system.

my TODO list for the next time that I need to update the Nerves system.

Meantime, I’ll make a custom Rpi3 system build and verify that this change is all we need.

@RickCarlino, I cloned farmbot_system_rpi3 and added ERL_CRASH_DUMP_SECONDS=-1 to rootfs_overlay/etc/erlinit.config then built the package . . and presto !
I can now generate a crash dump file.

Simply confirming that’s all we need to change.
( The Erlang doco sure is impressively detailed and accurate )

Great to hear @jsimmonds. I have put this on my backlog. PS: Sorry for the radio silence over the past week

PS: Sorry for the radio silence over the past week

. . My Congratulations on the recent releases’ Big milestone features

@jsimmonds This will be enabled in FBOS v10.1.0, which depends on farmbot_systme_rpi3 v1.11.4-farmbot.0. It is currently building on my machine and will be published shortly. Thanks again for the help.

We also get a shiny newer Kernel, with Elixir 1.10.3 and lots of other updates and fixes included.