This is all-new laser killing weed removal tool for the Farmbot designed by Project Cyclops, an innovative team of Engineering Students and programmers based out of Dubai, United Arab Emirates. Congratulations on this successful proof-of-concept demonstration work! 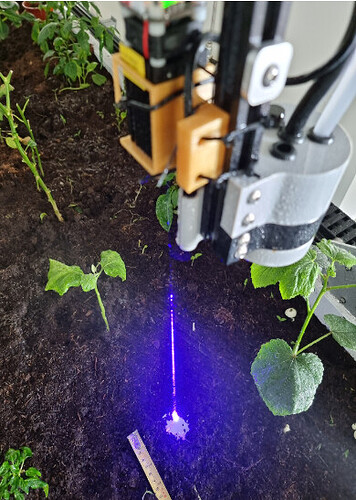 This tool is designed to destroy weeds using a laser.

GitHub: GitHub - rahularepaka/Project-Cyclops: Weed Detection and Killing Weeds using Lasers of 500mW on Farmbot This Project is in collaboration between Farmbot Inc and the Center of Excellence of Artificial Intelligence and Robotics

I am Rahul Arepaka, Project Lead, and Designer of Project Cyclops

So this project we worked on every Sunday for almost 1.5 months and it kills weeds based on the weed points detected from the FarmBot WebApp using Weed detection from the camera.

We faced a challenge in providing more power in terms of Amps to the Laser since the laser 500mW required 5A-6A to power it. So we have an external power supply of 12V 30A supplied to the laser and relay 5V which helps in turning on/off the laser-powered using the Arduino Uno

So we couldn’t properly connect the relay directly to the Farmdunio ports, instead, we connect it to the Arduino and powered the Arduino using the peripherals ports which means whenever the power is supplied to Ardunio the relay turns on and the laser is turned on.

The power of the laser can be increased or decreased by using the PWM port from the Laser Board to Ardunio Uno by programming the Analog port.

It is suggested to use a Laser greater than 2W to burn the plants faster but we have tried using 500mW and burns the small leaves but takes time for bigger plants.

Thanks, I will happy to answer any questions

Can you share some experiences with us? How far are you into the development, are you able to destroy small weeds? How long does it take to burn them?

Sure, we were working on this project for close to 1.5 months and we used to work every Sunday since we have university classes on the other days. It has quite an experience as we learned how to use external Ardunio to the Farmdunio and giving external voltage to the laser.

So we have tested using a 500mW laser so it isn’t a very powerful laser as compared to a 2W or 6W laser because, in Dubai, that is the only laser we could find.

For Larger Plants such as Chilly or Spinach, it takes around 1.5 min and more to burn properly but for smaller plants such as mushroom weeds took around 20-30 sec to destroy properly by providing 6A and at full power to the laser