So I saw the cost of the “plates” + 3d printed parts is ~$827 and I am wondering the feasibility of buying a 3d printer and making these parts myself. Even if this wouldn’t save me money out right at least I would end with a 3d printer that would likely save me money over time and provide me with a new and practical hobby. I was thinking of buying the Monoprice Maker Select off amazon and printing the parts with PETG filament. I am wondering how best to compensate for the difference between aluminum and PETG on the plates. I am hoping that I could just double or triple the thickness of the plates at various areas.

Any other suggestions for radically reducing the price of making a farm bot I would definitely be open too. I am quite poor and part of the impetus for me making this is to reduce the cost of my food and achieve greater self reliance in case of a further deterioration of my finances which is moderately likely.

Thank you for your time

My opinion is get a printer! You will find more uses for it then you think you would ever have. As far as printing the plates I would not. I would use a less expensive material like plywood and treat it. AKA paint it. This would not be a lasting material but could get a machine up and running very inexpensively. The other option is to buy the aluminum and cut it with a jig saw.
I am not sure how well pvc would work for the plates, If you heat pvc it becomes very leathery. it can be flatten and boanded together and built up layers. If you can find large diameter pipe it can be cut down the middle and flattened. built up in layers makding a very ridged plate. This may work as well. Getting the plates water jet cut makes a very clean machine and better looking. Hand cut parts look and fit only as good as the craftsman’s ability’s. I would also match drill all the plates. (Image courtesy of Tom's Filaween review of our Orange PETG at toms3d.org) In this guide you'll learn why PET-G filament is fast becoming a favorite. We'll explain what it is and what's it's used for. If you're printing masks for in response to...


Without going through the printed parts in the farmbot there are cases where PETG is just not a suitable replacement to ABS. Higher flexibility of PETG compared ABS could be a problem in some parts where how ridged ABS is happens to be important and the fact you cannot use PETG as a support material like you can with ABS because its not snapping off.

NuclearWinterIsComin the plates part of the frame you really cannot skip out on being aluminium while your most of your frame is aluminium because you want items to expand and contract at fairly much the same speeds. Its like the other post suggesting of using stainless steel for the plates same basic problem. Even plywood suggested by Josh is going to be less dependable. Also you are going to run into that pure PETG will be too flexible. Josh PVC and gardens is not exactly great due to leaking some chloride that argue with likes of plant protection mesh when it strong enough and PVC for plates would not be strong enough.
http://www.engineeringtoolbox.com/young-modulus-d_417.html

The reality is PVC, PET and ABS are insanely weak compared to aluminium. You are looking at optimistically at least 10 times thicker starts seaming insane and that is what you are looking at to get the structural strength in the pure materials of PVC, PET, ABS. Of course carbon fibre filament could be used todo the plates but that stuff is not cheap or fun to work with particularly when you are needing UV stable so ABS or PETG carbon fibre filament. I don’t know if PETG carbon fibre would work out any cheaper than cutting aluminium sheet and still having to argue with the thermal expand difference between PETG carbon firber and the aluminium frame bars. Basically I don’t see it as wise to look at changing the plates in isolation to completely reworking the frame. Material of frame and Material of plates has to be compatible with each other if they not bad things will happen over time.

On the topic of other options to possible reduce cost. 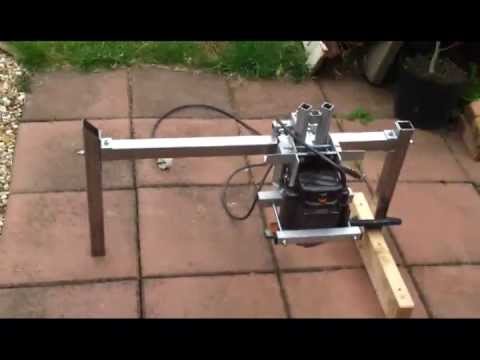 The cheaper home cnc uses just plain box and angle materials to make up the frame. This would require going threw and pricing both ways. So far I have not seen anyone experiment doing a farmbot limiting themselves to the cheaper materials but harder to work with at times materials. Yes box and angle materials means getting your mounting holes placed in exactly right places where the current extruded aluminium in design you can adjust.

Something else to remember the Nema 17 and the Ramps controller the farmbot uses are very close standard reprap 3d printer parts.(the ramps is) So 3d printer built the right way becomes spare parts source for farmbot or vice vs.

Wow lots of Ideas. I think I am going to at least try using wood for the plates. As a temporary measure at least. Maybe 4mm thick wood with 1mm of plastic on the screw holes so I have a slightly higher tolerance for the vicissitudes of a wood “mod” Or maybe just 5mm thick wood and try to replace it after a year. I am also thinking of printing a layer or two of each plate with pla or petg to use as a stencil for the wood working.

Maybe operating the robot at a reduced speed would help compensate for the different kinetic properties of the wood…?

That wood cnc machine looks amazing, but it definitely would be me “biting off more than I can chew”, if I tried to make it AND build a farm bot lol.

did you ever buy a 3D Printer and print all the parts yourself? My shapeways.com inbox is sitting at $879 for all the parts necessary for Genesis v1.1…And I’m wondering if I should go the 3d printer rout myself.

My father bought me a maker select from amazon for christmas. I upgraded to an all metal micro-swiss hotend because I wanted to print PETG. I printed one part so far with eSun PETG and I am happy with the build quality. I am waiting until I have enough money to build a farmbot before I start printing parts again.

I printed out my first farmbot part. This is the universal tool mount. I printed it using eSun PETG filament on my monoprice maker select with a micro-swiss all metal hotend. I am kind of kicking myself though as I printed 2 layers of raft which merged with the print, which is why the labeling on the holes is very faint looking. Definitely not bad for my second non-test print on my Christmas gift 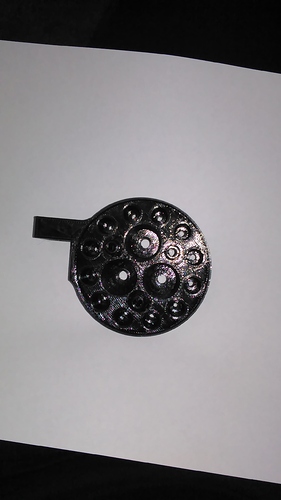 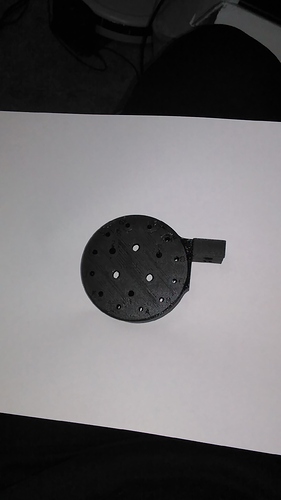 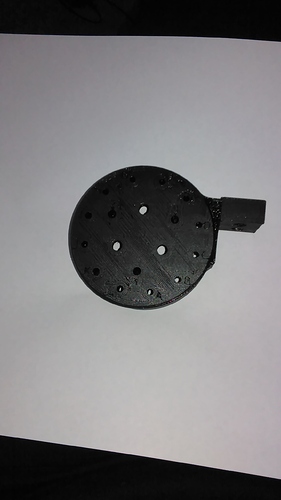 My printer was ~$289 when my father bought it he said and I spent ~$40 on the hotend upgrade. Not sure how much it will cost in filament, but I will have the ability to make more parts, new tools and other things later.

Printing your own parts is a great idea if you want to have a new hobby and have enough time on your hands to deal with the foibles of hobby-level 3D printers. But If you’re tight on time and get frustrated when things don’t work perfectly the first time, but have money to spare it can be easier to just buy parts from Shapeways. You might also look at https://www.3dhubs.com/ to find a local person who can 3D print stuff for you, perhaps at a lower cost. There may also be a makerspace in your area that you could utilize.

If you are going to purchase a printer, something to highly consider is printer quality. We recently purchased a Lulzbot Taz 6 because it is a very well reviewed printer that is also 100% open-source. We also have a Form 2 SLA printer for ultra high-resolution stuff. However both are quite expensive. But you get what you pay for a lot of the times with these things. The nice thing about having a printer (as mentioned) is that you will be able to continuously upgrade your FarmBot as we release new and improved designs. You can also augment your bot yourself with new tools, etc. But again, just consider whether or not you have the time for this stuff or if you would rather just buy parts.

As far as 3D printing the plates - you could do it, but you would definitely want to modify their designs to have ribs and thicker sections. FarmBot gets most of its rigidity from the plates, so you don’t want them flexing much or deforming under the stresses.

Yeah I have given up on the idea of 3d printing the plates. My dad is a machinist with access to cnc, lathes, etc and he said he would make plates for me, but he wasn’t sure if he had the right materials so we’ll see. I might buy a $50 drill press from harbor freight and a non-harbor freight hacksaw to make the plates.

I think you are underestimating how well tuned the maker select is out of the box. If you are going to buy a $2500 3d printer just to build a farmbot you are better off just getting the official kit for ~$3200.

Does anyone have any experience with stainless steel PLA in a 3D printer? Wondering how rigid it is / if it would hold up.

I bought a Prusa I3 MK2 and it was the best $775 bucks I’ve spent. The machine took a while to calibrate but now I just print perfect parts over and over. It’s great! If you don’t want to make the parts yourself, I can make them for you for quite a but cheaper than shapeways. You could also check ebay and amazon for the parts. Thanks!