I saw that the gantry rails and the tools could be quite exposed to harsh weather and got me thinking…
What would happen in harsh environments? Could the tracks get blocked by ice (or snow)?

I’d have two ideas to avoid this but they would complicate things quite a bit:

The first is to have the tracks and tools roll and function underneath the garden bed’s structure (I drew a quick picture to give an idea, the same principle could be applied for the tracks. 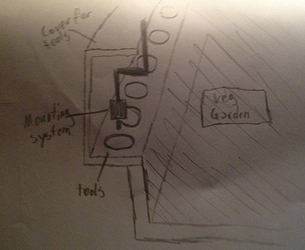 The second one, as the first complicates the design of the whole system, would be a more simple system that just covers the whole structure up when it isn’t being used…
A box could open and close around the tools when the mounting system isn’t near them and a cover could pull back and forth over the rails and cover the whole rail system when in home position (like a blanket I guess lol).

One final idea I was thinking of was to use magnets instead of a rail system for the gantry. This would be similar to the mag lev train concept but I guess it would make the project way more expensive and require a lot more energy.

Great ideas, thanks for sharing! I agree that a challenge right now is keeping the tools protected from the environment in the case they they are not sufficiently water proofed. I like the second idea you proposed. We could have a small roof structure over the tool bay and a motor that is able to open/close it (like those stadiums with open-able roofs!)

So far, the tracks have been fine out in the elements, though they have only been rained on (not snowed or frozen). However, you have to also ask the question: If it were snowing or frozen out, would the plants even be alive if they were not in a greenhouse? I think the best solution is to either put FarmBot in a greenhouse or just don’t use it during the winter months.

Would it be possible to mount the system on something like this? 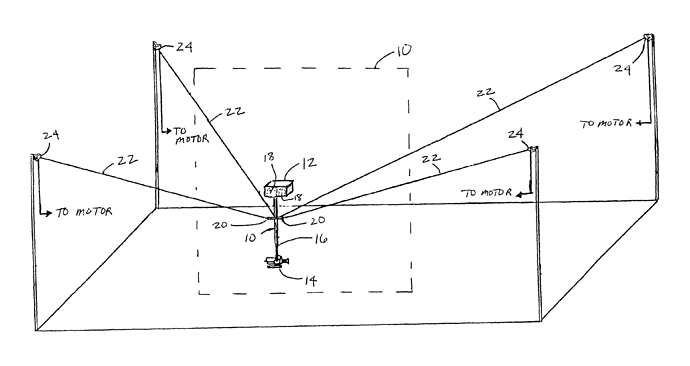 Totally. I would love to see a prototype of that design made!

Don’t forget about the hoses. They would need continuously rotating seals on the reels that hold them. That’s tough to do, which means it’s expensive to do.

Is there overcurrent protection for the motor that runs the trolley along the rails? I’m thinking that it would be really easy for something to fall on the rails. With overcurrent protection, you could … oh, wait, these are stepping motors, right? You’re not going to get a lot of indication there. Is the loop closed on the motor control or are the stepping motors being driven as if they’re stronger than anything else in the system? It would only need an optical chopper to be able to see that you’re losing steps.

OR without adding hardware, you could run the trolley from one end of the track to the other end, then see if you can still get back to your limit switch when you think you should. If so, then your track is not obstructed and you’re free to count on the stepping motor counts for position. Oh, software, we love you.

Oh, and the limit switches should be hardened, because if your counts get off because something (stick, plants, dogs) gets the trolley off-position, when it homes again, it will crash into the limit switch.

Yes, the stepper drivers have overcurrent and thermal protection. We’re implementing rotary encoders on all motors for closed loop feedback control. So FarmBot will know right away if it is stalling on some obstruction.

Lower-end more affordable FarmBots in the future will not have encoders. Instead they will just have endstops and need to periodically go Home to make sure it is where it thinks it is.

I assume the web interface has a notification system to let the user know something has gone wrong. We have an environmental monitor (40 stations in the Hudson River watershed), and I get an hourly Android notification of how many stations are reporting. It’s easy to dismiss, but also easy to notice when you haven’t gotten it or if something is wrong with the number of stations. Google’s GCM (Google Cloud Messaging) is the service I use. There are libraries, or if you know how to do the OAUTH2 dance, it’s easy.

Yes, the web interface receives all logs from the device. It’s not implemented yet but we’ll eventually allow the user to turn on email/text/push notifications for certain events.

One serious consideration is the 3D printed parts. I don’t know what kind of filament they’re using but all plastics warp, brittle, generally mess up. I know you’re talking more about the motion system but this is a very real issue for service life. Just a thought to maybe use like ASA instead of whatever they’re doing now. It’s a weatherable UV resistant polymer similar to ABS in it’s mechanical and working properties. If you have a 3D printer it might be a good option. the company that makes the stuff is a little lab down in Missouri called 3dxtech. http://www.3dxtech.com/asa-filament/ for those of you interested that’s the link to their ASA filament. I’m somewhat considering offering the remanufacture of those parts for my print service. Like a complete overhaul. Worthwhile idea?

Yes, we’re looking into using ASA, as well as injection molding with more industrial grade engineering plastics. Right now we have some problems with PLA warping in the sun when its under load.

Awesome man! I’m actually going to be using ASA for a few designs of fully printed tactical gear for military and law enforcement. Got some stuff in testing right now done in ABS. The material research for ASA was pretty intensive so I figured I’d throw it out there and see if it could help. It’s a different application but if your interested in how the material performs while getting knocked around I can keep you posted on how it does. I’m ordering in a batch next week and honestly if you guys don’t already have some, I can send you the slice settings, material notes, even a sample print of a bracket or something to see how it does. Typically it takes me about a week to master a new material so its no trouble; I’m going to be doing a bunch of test prints anyway.

Living in an area with a harsh winter environment (Calgary, Alberta, Canada), I have given a little thought to this.

That would awesome! Feel free to post your results here in the forum so we can all learn from your testing

Great post! I think an inexpensive shade structure/canopy could be placed over FarmBot for the summer to prevent bolting without preventing FarmBot from doing things normally. You could position to cover any percentage of the bed if you wanted.

For winter, I don’t think the water needs to be purged from the system because the tubing we use is super flexible and can handle some ice expansion just fine. Ice buildup could be an issue though. But that could be solved by putting FarmBot in an inexpensive greenhouse (which would also extend the growing season!) https://farmbot-genesis.readme.io/docs/put-farmbot-in-a-greenhouse

I don’t think you appreciate the impact of -20 degrees Fahrenheit on plastics. Take a sample of your tubing, put it in a deep freeze for a day. It will no longer be flexible. (We CAN get colder than that. I have gone camping at -35.) Since water starts expanding after it reaches 4 degrees above freezing, and continues to expand as it gets colder, there IS going to be temperature where the ice will rupture something.

Also (having worked with plastics for several years) you need to keep in mind that plastics (due to outgassing) become more brittle with age. You should include in your maintenance program, an annual check for the flexibility of all hoses; with a recommendation that they be replaced as soon as there is an obvious loss of flexibility. Being a bit proactive there will avoid nasty surprises later. Murphy’s Law being what it is (and we all know that Murphy was an optimist) leaks will tend to happen where they can cause the most damage.

Another area that I think needs to be checked in the design is the impact of having dissimilar metals in direct contact with each other. Please read up on galvanic action. You are using stainless steel screws in aluminum. One of them may to start “eating” the other. This is NOT an area where I have any great amount of knowledge. Maybe someone else on the forum could take this a bit further. However, you may want to look at hardened aluminum screws rather than stainless steel. You DO run into lower torque allowances, but you are not dealing with huge weights or accelerations.

Also, instead of Philips (cross) head screws, you might want to consider Robertson (square) head screws. I know they are now incredibly common in the US, but they are becoming more available. They are MUCH less likely to slip.

I was wondering about harsh weather as well. I have to admit, when I first saw a picture of Farmbot, I thought, "hmmm, that was developed in a part of California where it never snows…"
My area (North Carolina) is pretty temperate as well, and some greens are feasible over the winter, but we also get snow and ice. Even a simple hose timer will fail if left out all year long for a couple years. Perhaps Farmbot is different for some reason?
How difficult is it to remove the gantry section (with the tools and electronics, I assume) for the winter, and reinstall it in the spring? Any reason why that wouldn’t be a good idea? It does mean that you don’t have the option of winter crops, which is a shame.

I also like the idea of an enclosure for the gantry, perhaps on one end of the bed to cover it in its “resting” position. Even if it isn’t fully enclosed with a door, it might soften the appearance of the gantry and help the crabby-neighbor factor, as well as give it some protection from the elements.

FWIW, I don’t think that we should assume that most people in areas with snow will be using greenhouses; there are a lot of situations where greenhouses aren’t feasible in small lots, especially in suburbs, but raised beds are.

FWIW, I don’t think that we should assume that most people in areas with snow will be using greenhouses; there are a lot of situations where greenhouses aren’t feasible in small lots, especially in suburbs, but raised beds are.

I would agree. I know that in Calgary, there is a limitation on the percent of a lot that can be covered by “buildings”. That includes garages, and greenhouses (although not sheds, I believe). I DO have a 6’x15’ greenhouse (tomatoes, cucumbers, peppers), but also have a 15’x21’ raised bed garden.

Upon a bit more digging into galvanic corrosion, there is a fairly simple fix. The reaction requires a conductive liquid to be present. Since tap water can contain salts (and therefore qualifies), a simple coat of paint after assembly will seal everything. This is often done on aircraft to assist during pre-flight walk-around, as a mechanism to see if any nuts have moved (the paint will be cracked). To prevent fouling of the holes in bolts, a simple wipe around the location where the bolt head comes in contact with the plate would be sufficient. (You might even just use nail polish). Note that the OTHER end of the hole, where the bolt protrudes (or is inside the hole) must be treated the same way.

It WILL be a bit harder to do things like adjust the cams.