Would someone with a working Genesis XL mind sharing their hardware settings in the device tab? I’ve been through the videos and documentation and I’m hoping it’s just a setting that I’m missing that’s different in the xl kit.

I’m having an awful time getting my farmbot to work properly and I feel like I’m running out of time to get seeds in the ground. I don’t want to customize anything to do something different. I just want the basic commands to work. Thanks in advance.

What are the problems you are having?
I started with the defaults and ended up just slowing the FarmBot down. At slower speeds this either work better or the fails are easier to see & root cause.

What are your device settings?
Take a couple of screen caps of your device page. (This is more effective than looking at others, as obvious errors can get overlooked) 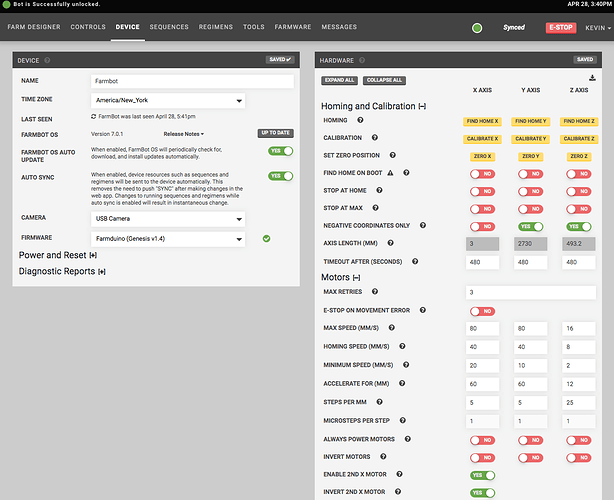 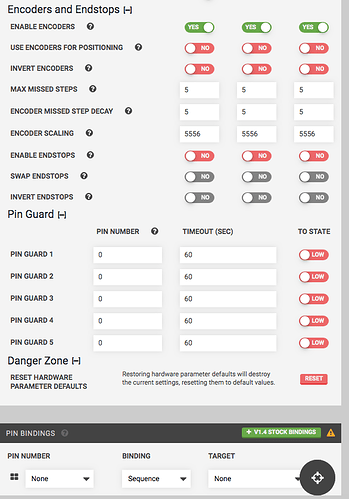 use encoders for positioning

on all axes. I think that will solve your problem as long as you have encoders (stock fb kits have them on their custom stepper motors).

Btw it would be good to have this enabled by default in case farmbot kit is the original one feom vendor. This is sort of advanced /counter intuitive setting…

Sw documentation in wiki says this feature is alpha (is it?), but my experience was that i always had to have this one on to have location precision

Also, I had the most problem with the Z-axis going up.
I added white lithium grease to the lead screw. I think this had the most impact.
I also slowed down the Z-axis speed to 10. I know it is slow, but I wanted to get it working first, then we can dial it up as we gain confidence.
I also re-visited the V-wheel adjustments on all V-wheels, and I biased to looser over tighter.

And…
I “always power motors” especially the Z, as gravity will cause it to drop.
I set the max lengths for all axis to the actual length. Travel FB out to the max, subtract about 50mm for guardband.
I set max retries to either 5 or 10 (started at 10, dialing back, 5 will be my default, for a while)

I used the powdered graphite lubricant on the lead screw. Is the white lithium grease better?

When setting the lengths on the axis- Do you use the calibration buttons in the homing and calibration area or do you do it manually?

I’ll make the other adjustments. Thanks

Okay, I’ll enable the encoders for positioning. Thanks

I “walked” the FarmBot to the Max endstops (hardware - till the wheels touched the stop). Then I looked at the readout on the controls. That, -50, became my “MAX”.
Btw, I think that when manually moving the Bot, you should go slow, as the motors do generate current, which can flow back. I know the FB Guru’s added some protection, but best not to pull the reserve chute too early.

(Best is to power the Bot to the limits).

I think the white lithium gets better penetration, lasts a bit longer, but also makes more mess. I applied as the screw was going from top to bottom, then I used a cloth to remove excess. I have re-applied a few times, but the need is less as the screw and block are pretty well coated at this point. Adding the grease cut down noise and vibration, and solved the issue of going up (was skipping)