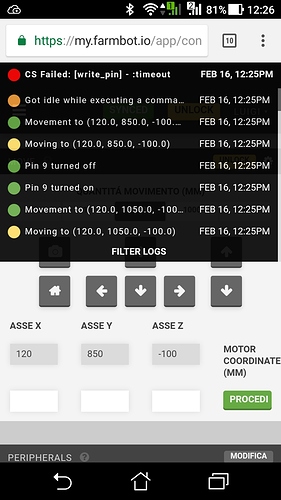 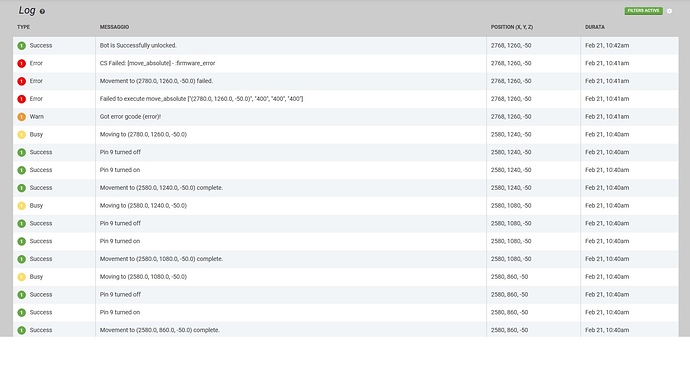 farmerror.jpg1627×864 165 KB
Good morning,
a few days ago I have a new problem with the farmbot. I had a connection problem that I fixed by reinstalling the FarmOS in the raspberry (6.0.1).
Once set up I launched the test of small sequences and everything works fine, then I tried the sequence of the watering but after a few minutes when the test is started, the machine stops as if the E-STOP button was pressed.
I’ve unlock but the problem persists.
In the meantime, I see that it is a new version of the software is available, then update (6.0.2) and reboot the system.
I try again with the test of small sequences and everything is fine, then I try the sequence of watering and known that the app is not responding, at the top a green key with writing disconnected appeared.
But the sequence continues without problems for several minutes until it freezes as it did with the previous version of the software.
The sequence in question has a duration of about 30 minutes has been used for several months and had not given problems I rechecked every single step and I did not find any mistakes. Do you have any suggestions?
Silvio April 19, 2018, 3:32pm #2

Good evening, I will contact you to update you on the problem previously notified. I have updated the app, now I use version 6.3.2.
When I launch a sequence test, the machine hardly completes it.
Both the program and the machine stop and to regain control, I have to press the “unlock” key on the top right, in the log the word “moving to …” is displayed next to a yellow dot.
I also tried with simple steps like a series of small movements on a single plane, first on the Z axis and then on the X axis, even in this case the whole system is blocked during the execution of the sequence test.