I am setting up a farmbot indoors in my apartment because sadly I do not have a backyard on the 4th floor. I am almost sure I won’t get enough light through my north facing windows so I want to supplement with some grow lights on a timer and some reflectors. I plan on trying to extend the hardware and software somehow to drive a relay/big switch for the lights eventually, but a wall timer I think would suffice at the start.

The thing that has me worried is that a bunch of the wisdom on the forums suggests that farmbot-ing indoors is unwise because the grow lights must be too far away from the plants to be effective in order to give the gantry and z axis enough clearance. Most of the internet seems to agree that getting the lights 10-15 cm above the plants is ideal to max the amount light hitting the plants without burning any foliage, which is a lot smaller than the clearance the farmbot seems to need.

I did a bit of research on putting the lights beside the raised bed and pointed inwards, but from what I understand this really screws with the plants sense of up and causes poor growth and unshapely produce. Makes sense to me, the sun is usually upwards-ish in nature.

So, I’m looking for some ideas for getting enough lights on the plants. I am considering moving the grow lights in and out of position as the farmbot goes to do its’ work. In terms of light reaching the plants, don’t think that it’d be the end of the world for the lights to be raised temporarily via a pulley or what have you as it waters them all. It kind of sucks to have to build a whole other system to move the lights (and have more moving parts which will definitely not be nearly as well designed), but I am pretty sure I won’t be able to get away without doing this.

Another idea I had was mounting some LED strip lights like these between a static frame at the end of the bed and the gantry itself such that when the gantry was in the “home” position they were stretched out over the bed, and then when the gantry was moving they would recoil onto some spring-loaded reels or something like that. This sounds rather error prone and sketchy but is so crazy it just might work.

Any other ideas you fine folks might have for grow light growing indoors?

I’ve done a lot of greenhouse growing and have used grow lights extensively. A few tidbits from my experience:

On another topic, when you are indoor you might also have to deal with CO2 for the plants. They get plenty outside, but unless you have enough animals indoors it might get a bit low for your plants. A lot of indoor growers use a CO2 sensor and a supplement CO2 supply (easy to get at most gardening supply shops).

I think the “gantry” will be a challenge for adequate lighting.

Thanks for all the tips @bgmoon!!

LED lights are not quite there yet and to be effective, they are quite expensive. The bandwidth/spectrum is to narrow -> which is also why they are efficient, just not for plants. Best lights are ceramic. Ceramic lights don’t want to be cycled on/off rapidly and don’t want to be moved around when they are hot.

Yeah, my research seems to agree. It seems like they really only pay themselves back if you run them for a long long time and don’t have to replace bulbs like you would in a HID setup. I agree moving ceramics / other HIDs when they are still hot is a bad idea as well, same principle as stage lights which I’ve worked with a bunch. So I think I’m stuck with LED if I want to make this contraption. From what I understand, more and more LED grow light manufacturers are headed towards “full spectrum” LED lights, which still aren’t just plain old white but try harder to approximate the intensities at various wavelengths of the sun. See this sucker with this spectrum: Maybe I can build a stubby, shorter gantry then that only needs 3’ of clearance. If I only grow short stuff I could potentially get away with germinating outside of the farmbot bed with a very high proximity light and then manually moving stuff in. That kind of stinks because well half the point is to automate away the seeding and germinating step, but it would be a way to get started at least.

On another topic, when you are indoor you might also have to deal with CO2 for the plants. They get plenty outside, but unless you have enough animals indoors it might get a bit low for your plants. A lot of indoor growers use a CO2 sensor and a supplement CO2 supply (easy to get at most gardening supply shops).

I had no idea, I will look into this, thanks for the tips!

Has anyone ever seen a greenhouse with grow lights that had to move in the day to day operation of the thing? Or maybe just get out of the way during harvest? How do those kinds of things work?

A good shop around my area of the country for CO2 is Fifth Season Gardening Center. Here’s a link to CO2 controllers and supplies:

These guys also carry a bunch of that sort of thing:

Nice thing about these shops is that they have some good people that work there that can sort things out for you. I’m not affiliated in the least with either. Just sharing info.

@airhorns Have you made any progress with setting up lights for indoor use. I will be receiving my bot soon and will also be using it indoors. Thank you for any assistance and for your original post!

I’ve kind of gone my own way. I took the farmBot out of my greenhouse and have instead started building automated irrigation, climate control and lighting. Oddly, I’m still using 5’x10’ tables. I’m up to three of them now. Here’s some pictures of my setup:

This is the first table, with plants just starting up. You can see two ceramic grow lights over the table. The gray round thing on the back left side of the table is the nutrient injector pump deliver fertilizer with the irrigation cycles. 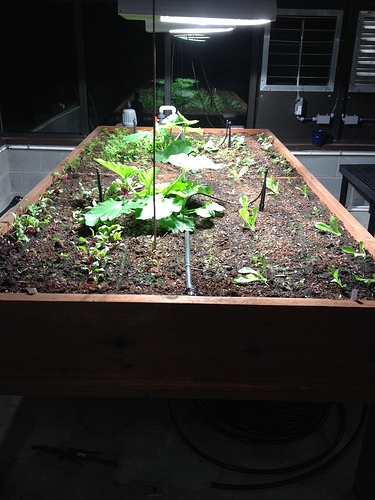 Here’s a shot of all three tables in a row. I have four more grow lights to install yet. Two for each table. I also still need to install the irrigation into the second two tables. You can see the plant growth in my first table at the end of the row. I’ve been eating veggies out of that grow bed for about a month now 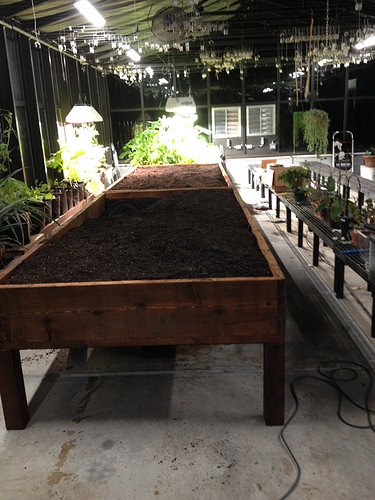 Total cost of each table, with grow lights, the cost of the table, dirt, irrigation and controllers is about $1500. The lights are about $400 each. The table cost about $500. Irrigation and control for a table is about $30. 50 cubic feet of organic grow dirt is about $130. The tables could be made for less, but I like using western red cedar for anything related to food production and its pretty expensive.

Here’s a shot showing the bottom of the tables. I put a couple of layers of landscape fabric in the bottoms. The boards have a ½" gap between them to allow water to drain out the bottom. 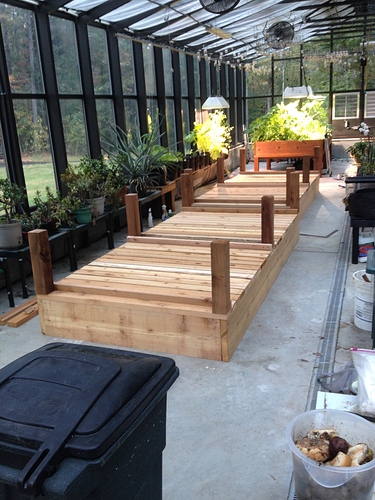 You might also note the overhead fans in the green house. Those serve two purposes. First they aid in pollination. Second, they make the plants “move around” when they are young and that makes the plants build much more rigid stems. You can also see a couple of louvers on the back of the greenhouse. Each of those are computer controlled to open at certain temps. There are two sets of ridge vents in the green house as well that are temp controlled. And there are two fans on the opposite end of the green house that are controlled to pull air lengthwise through the greenhouse to manage air.

I use well water with a moderate mineral count for irrigation. That provides a lot of micro nutrients to the system.

I also didn’t show my seed germination station. I plant seeds in some nice little hydroponic germination beds with thermally controlled heaters under them and a “really close” grow light overhead to get plants started. Once they grow, I hand pick “only the best” plants for the tables. That way every space is 100% occupied by a strong plant. The space in the beds is to “valuable” to waist on a seed that might not germinate or a plant that is not very strong.

Great to see what you established @bgmoon!

How do you deal with diseases and small flies and stuff like that? How much power does one light draw and how long do you use them per day?

"How do you deal with diseases and small flies and stuff like that?"

–> layers of defense. First, I have three bat houses that each hold up to 300 bats planted around my property. Here’s a picture of one of them: 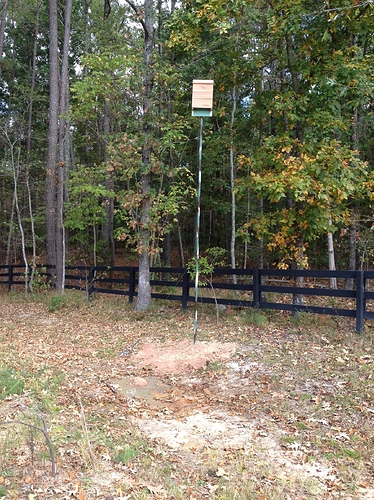 Second, I have a number of hummingbird feeders stationed strategically around the greenhouse. Bats eat most flying insects at night, hummingbirds eat them during the day.

The greenhouse itself has screens on all the vents and louvers and the doors are commercial grade, sealed doors. The floor is concrete.

The plant tables are made from western red cedar which also contains natural pest repellants.

The major pests left to deal with are aphids and scale. We use diatomaceous earth around the perimeter of the green house to kill the ants that bring the aphids into the greenhouse. This is very effective.

For scale, we keep the plants healthy, well hydrated and grown them “tougher” and use predators against them.

We also grow venus fly traps in the greenhouse for what’s left over. All in all, highly effective with little to no work other than using nature against natural enemies.

"How much power does one light draw and how long do you use them per day?"

–> The grow lights over the tables consume approximately 300 watts each. We run them for 10-12 hours a day depending on the time of the year.

We also produce all of our own power. We have 110 ground mounted solar panels that produce 23KW peak. Typically, we generate between 2 MW Hr’s and 6 MW Hrs of power per month.

–> The grow lights over the tables consume approximately 300 watts each. We run them for 10-12 hours a day depending on the time of the year.

Thanks for the detailed insight, @bgmoon that is really interesting!!!

But for the sake of argument, lets assume all on peak rates --> meaning just over $11/month per table, if you had to “buy” power.

Finished getting all the irrigation and lighting in place this weekend. Here’s some final shots of my three tables. Each are “farmbot” size (1.5m x 3m). Dirt is 1’ deep. Table is 32" from floor to top. Two ceramic grow lights per table with 4200K broad spectrum tubes. 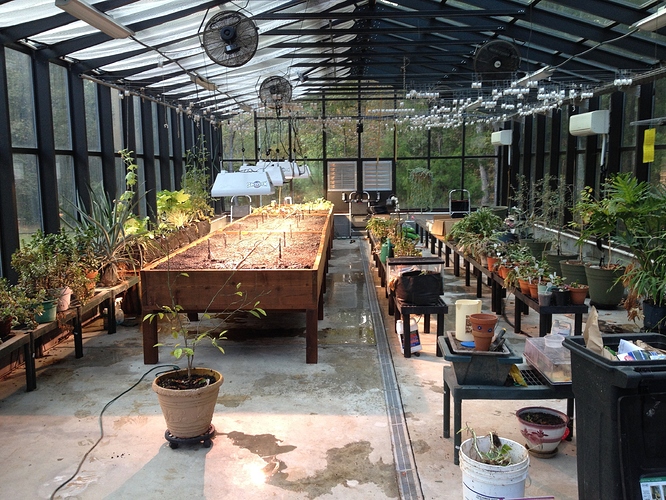 Each table has 6 micro-sparers on an independant zone of the irrigation system. Each sprayer “mists” water in a 5’ circle. A nutrient injector can add selective nutrient to each table while irrigating.

Lights can be raised/lowered to allow plant growth of up to 7’ above the table height.

Six overhead fans (only a few showing in that image) are station with three going one way and three going the other to provide continuous breeze to aid in pollination and to strength plant trunks.