Hello FB Forum Folks - Its been a while since my last post, but not due to inaction - Just way too busy.
FarmBot has been very intermittent.
It will either just shut down and not restart, restart at arbitrary times, send off some very obscure logs, if at all, and generally not run in a consistent manner.
We have been having an very hot summer, with quite a few +38 C/+100 F days.
I used a very expensive and accurate FLIR Thermal Camera to capture the temperatures of the Raspberry Pi & FarmDuino, and I was not surprised to see temps at or over the 85C mark (Upper threshold for almost all the IC’s in the device.
I have already swapped out four Raspberry Pi’s (one from original kit, one sent by FB (thank you) 2 purchased from my local electronics store (Fry’s).
I have swapped out three FarmDuino boards. I have used four different Micro SD cards. I have used two full sets of steppers.
I installed four vents to the sides of the electronics box to provide convective cooling to the box.
My next step is to add a vent fan to move air inside the box, as well as to try to fabricate some type of shade structure to the box to keep direct sunlight off of it.
What I would like to know id if other folks in hot climates have experienced similar fails.
I will post a dropbox link to the thermal capture when I get a chance - very interesting data.
The fine folks at FB also said they have a Farmduino 1.5 in the works, but I am not sure if this will help - need to see a change log.

We also already had some +38°C days here in Germany, but I’ve never experienced heat issues with my device. But my bot is in a greenhouse (Environmental temperatures around 42°C/107F) and the electronics box does not get direct sunlight inside since the front door is directed to the north side. Also I’m using a different electronics box without any cooling attempts.

How about your CPU temperature? If you still won’t get enough cooling you could try to mount a heatsink on the Raspberry chip. I believe that the convective cooling will not have much effect on the CPU chip directly, so having a greater surface where the flow can take heat off would probably help a lot.

@Ascend
Thanks for the reply & input!
Good to hear that your FB seems to be running w/o error at a high ambient temp.
However, I think the direct sunlight factor may be the key.
Direct sunlight adds quite a bit of heat to the equation. I will focus effort on devising some type of sunshade.
I think I will also replace the Raspberry Pi, just to rule that out.
Stay tuned…

We have installed heatsinks but our temperature is still very high. As we are in Abu Dhabi, we highest on a daily basis goes to 43 Celcius but the FarmBot temp is 83 C. What can I do to fix this issue? 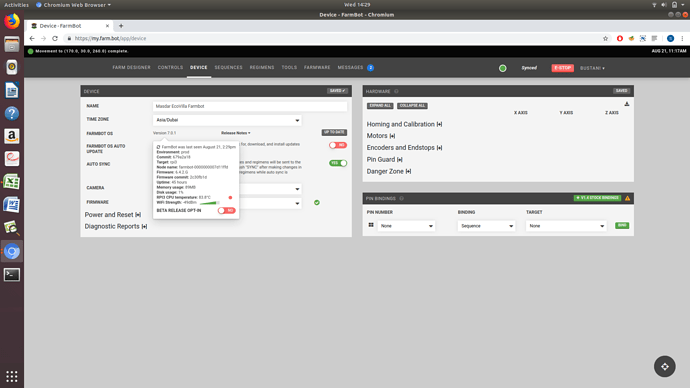 Wow, driving the electronics to their limit with those temperatures …
Try to safe the electronics box from direct sunlight when its in home position, as we discussed before.
If this won’t be enough you could try adding an active cooling system, like adding fans that keep pushing air into the heatsinks. Not really effective with 43 degrees but might be worth to try.