Hi,
I have been using my farmbot for a few years now with moderate success, I tend to mainly use it during the growing season. It had been sitting dormant over the winter months and I recenty planted another bed of veggies.
Now it is coming up with the following error. The error is repeated several times, but happens only twice per day.
[Elixir.FarmbotCore.Asset.FarmwareEnv 930b5bec-b7ba-4d52-acfb-b1770ea41dd4 #PID<0.828.0>] HTTP Error: Elixir.FarmbotCore.Asset.FarmwareEnv {:error, :socket_closed_remotely}
After the error happens, any jobs / tasks that have been scheduled fail to run. There are no corresponding logs that give any inkling as to why?
So far my twice daily watering task has had to be always manually started. When I do this, it completes without error.

You are using a bespoke Farmware ?
What is your FBOS version ?

After the error happens, any jobs / tasks that have been scheduled fail to run.

Possible cause: End of Life FBOS version Are you running the latest version of FBOS? We recently had to declare “end of life” on some old versions of FBOS for system stability reasons. If your FarmBot was in storage for a long time, it may have been temporarily blocked from the server for not updating to the latest version. If that is the case, the problem is easily fixed by reflashing the device. It is a good idea to always perform a hard reflash before investigating software issues. Please let me know if this might be the case.

Possible cause: LAN issues FarmBot OS has stricter network requirements than traditional desktop software. The :socket_remotely_closed error is often caused when something between FarmBot and the server prematurely close a socket that FarmBot was using. 80% of the time, it’s caused by bad NAT settings when routers are “daisy chained” (see image below). The other 20% of the time, it is special security software running on the LAN, such as firewalls and content blockers that are being overly aggressive in blocking required ports (if that is the case, the software is most likely blocking web access to the API). 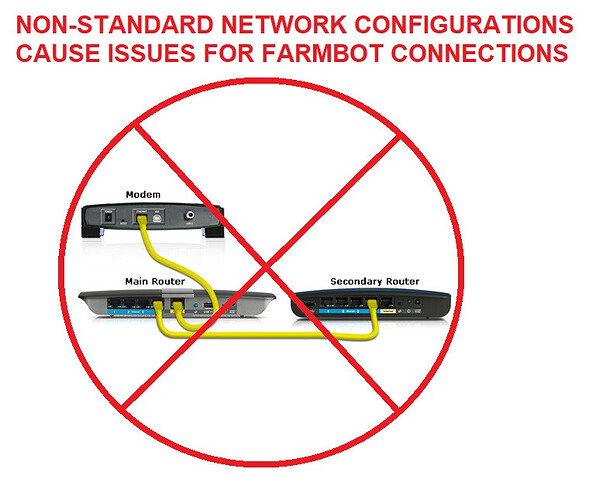 If you provide me your device ID (available by clicking the green connectivity saucer on the nav bar in the web app) I can take a look on Monday. Thanks and speak soon.

Thank for the replies John and Rick,

My Farmbot is running the version of the Farmbot OS that I downloaded from the Farmbot webserver last week. I have also updated the firmware as below: 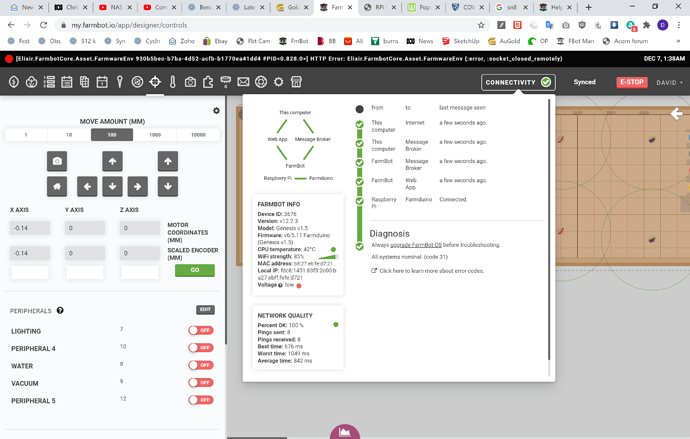 There is no bespoke Farmware, everything is “off the shelf”

The Farmbot accesses the internet via a wifi connection to a wireless router, this is connected via two daisy chained Ethernet switches and then finally to our NBN gateway router. Could this be an issue? all of the above (other than the external address for the internet connection) are on the same C class subnet.

@dmbgo Is this issue still unresolved ?

I’m wondering whether there was a transient problem with the Heroku endpoints that FarmBot Inc uses for HTTP ?

As I look at my own bot doing a Sequence ( no FarmWare used ) over a large Group of weeds, I see that children of the FarmbotCore.AssetSupervisor.FarmbotCore.Asset.FarmwareEnv supervisor pop into existence for no apparent reason. Think I’ll take a look at what the code is doing there ! 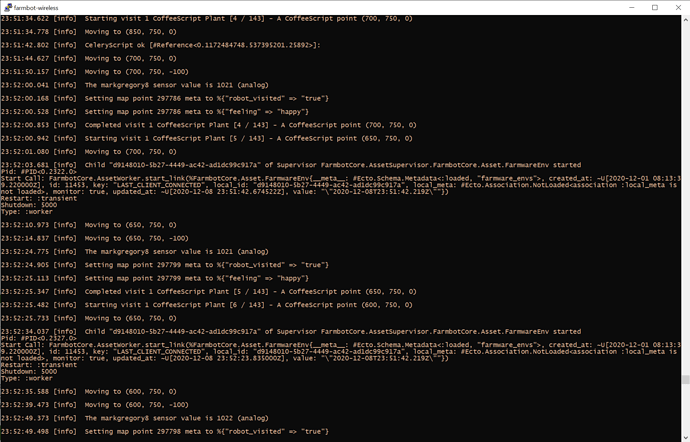 I haven’t ssh,ed into the Farmbot while it is trying to tun a sequence John, so I can’t comment about the spawning of child processes.
I think the issue is close to a resolution, I’ve been communicating with Rick via PM. Whilst we are still investigating, Rick has, at least, resolved some possible causes.

After some investigation we have concluded that this is a stalling issue rather than a network issue.