How to start the setup wizard

I’m not a new Farmbot user, but I remember when I first set up the Farmbot, I thought the motors seemed a bit weak for the job. I adjusted the motor speed and other settings until I got it to move reliably, but still felt that things were only “just” doing their job.
2 years later and with the onset of cold weather and aging of plastic tubes, all contributing to the force required to move the bot, I have continual “Motor Stalled” and “retrying movement” errors.
It was timely to see the Setup Wizard updates in the latest 15/6/21 software update, and serendipitous indeed to see that the screen showcasing the improved Setup Wizards was a video of Rory, with the introduction “it seems like it is trying to move too fast, or doesn’t have enough torque”. “Exactly my issue” I thought. Then after 1/2 hour or so, I realised that I had no idea how to access the video, or to start the setup wizard.

Hi @dmbgo I read somewhere recently how to find the Setup wizard ( and the troubleshooting videos ) : use this URL. Good luck

Thanks John, but this url only takes me to my Farmbots landing page. The same as https://my.farmbot.io/

@dmbgo
David, you’ll need to be already signed-in to your FarmBot account to use that one

@dmbgo As @jsimmonds you do need to be already logged in to click the link. Please let us know if you still have trouble and I can take a look.

Thanks John, I thought I was signed in, in a different tab of the same browser (google chrome). I tried again this morning and your link worked.
Rick, I still haven’t found where that video is in the setup sequence. Do you mind telling me which part it is located under?
Thanks
Dave

Does this help? There you can find the video that is also mentioned in the Software Update thread that Rory posted. 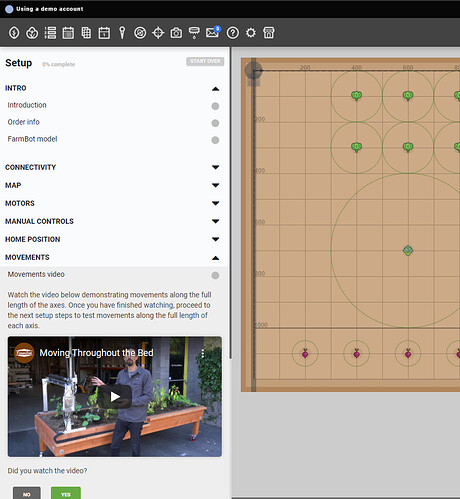 @dmbgo I will defer to @roryaronson on this matter, as I was not involved with the development of this feature.

Both Getting Started videos are also available on our youtube channel.

Thanks Ascend, Rick and Rory.
I had no trouble finding the video in the end, I should have spent more time looking in the first place