This morning we deployed a new version of the FarmBot Web App. Here’s what’s new:

Thanks to a suggestion from @aronrubin, images can now be rotated in the farm designer map rather than at capture time. To use this option, toggle ADJUST ROTATION DURING CAPTURE to NO. This setting is available by clicking the

tooltip next to PHOTOS. Note that this setting requires v1.0.14 of the take-photo package. If you have an older version, press the rotating arrows icon to update that package.

This significantly decreases the time required to take a photo. On Genesis bots, we’re seeing a 50% decrease in time, and on Express bots about a 75% decrease! This option also allows for the uploaded images to no longer include black edges.

Going hand-in-hand with the setting above, the farm designer map can now crop images to either remove the black edges from images rotated at capture time, or to re-align edges with FarmBot’s axes after images are rotated in the map. To enable cropping, open the PHOTOS menu in the map legend and turn on CROP MAP IMAGES.

A new setting in the map legend under the FARMBOT layer allows you to SHOW CAMERA VIEW IN MAP AREA based on the calibration settings and whether or not images are being cropped in the map. 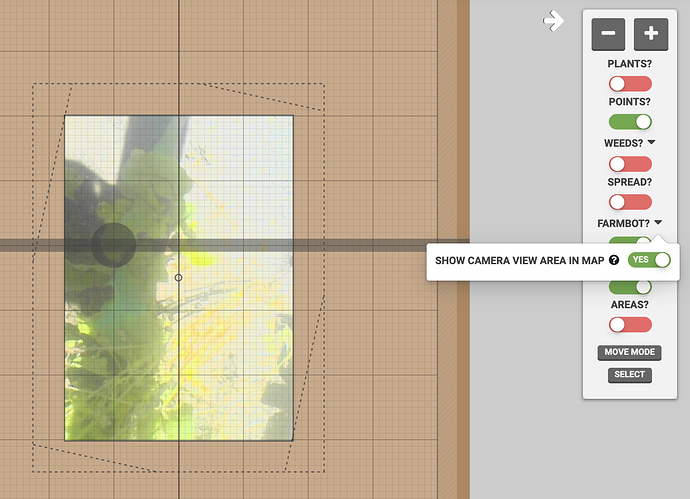 You can now add grids of points to the map using a similar interface to adding a grid of plants. A new toggle for turning on the CAMERA VIEW AREA allows you to quickly create a point grid that can be used for taking pictures of the whole garden with minimal overlap and no gaps! 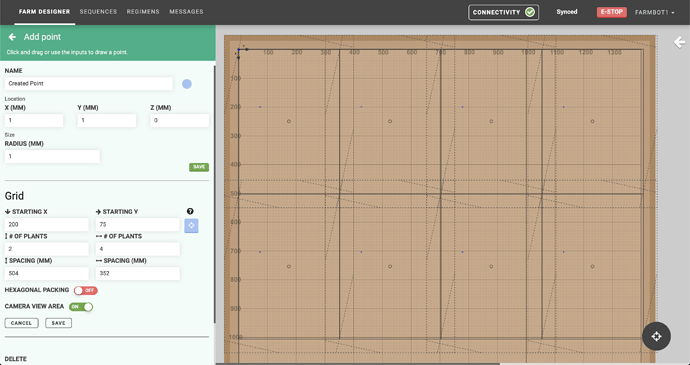 First, your numbers do not match my observations. It was taking no less than 15 seconds for me to take a picture in the past. This evening it is taking no more than 3 seconds. So that is no less than a 500% improvement.
Second, doing this test I believe I ran into a bug. I have to turn the lights on to see anything through the camera at 8:30pm tonight.

Issue:
Lights indicate off without interaction

I forgot to mention how impressed I am with the pace of improvements. I don’t know how you are releasing these updates so fast but a tip of the hat to you sir

I believe I ran into a bug

Thanks for reporting this. This sounds related to another issue we’re tracking with the new analog peripheral sliders. (You may have also noticed that the logs coming from the bot are not quite right when using the sliders, which can confuse the frontend). We should have a fix for this with the next release of FarmBot OS.