i have this problem with my web app that no manualcontrols work neither my motor settings work though the farmbot is up and running itshows me . as well as my both x1 and x2 motors continueto run as i power on my farmbot without pressing any key, and my y and z axis do not movie even after i click the manual up and down controls in web app. i dont understand what is wrong. i also emailed the probem to support@farmbot.io but i dint get any reply . also i want you to know x1 and x2 start running even if i dont pluf in my arduino setup into the raspberry pie
i am not using encoders
i have reconfigured the farmbot os 10-15 times now
setup the arduino firmware 10-15 times automatically with farmbot os as well as manually
i dont know what is wrong please help me out
thanks in advance

If your motors start running as soon as you plug in power, I think your wiring is incorrect.

Can you tell us (or better yet show us) how you’ve wired up your motors to the RAMPS shield?

i have wired it exactly same as shown in the diagram. Infact it was running well before 4 days.
i was working to install the endstops but it dint go well even when i turned the endstops switches on the app.
and since it dint happen so i plugged the farmbot off. after i came back in the evening i switched it on again (without touching the wiring) and the x axis motors started making noise as soon as i turned on the power
i thought the web application must be giving some error so i removed the printer cable of arduino from the pi
but without the arduino even connected to raspberry pie the x1 and x2 motors keep running.
i reconfigured everything again (arduino firmware and farmbot os ) but as soon as i plug in power to arduino
the x1 and x2 motors get a true signal to keep going
i thought there must be some prblem with my account since the settings were not turning on or off in the web app.
i made a new account and linked that account with the farmbot but yet the problem remains same

i also want you to know that the when i start the farmbot web app
the controls page shows me that x and y and z all are initially at ( -1, -1, -1 )position 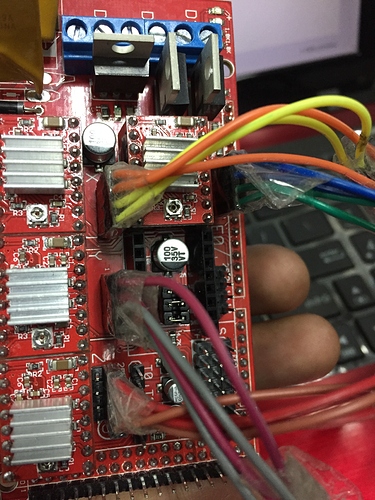 i have taken up a video of the same but i am not able to upload due to its size. I could email you the same if needed if u share your email id

You can upload it to Google Drive, YouTube, or Dropbox, and place a link here. It would be best if multiple people can see your video, because I’m not very good at troubleshooting this hardware. Others will be able to help you better than I can. The more information you post here, the higher chance we have of finding the solution with you.

Means that raspberry can not communicate with arduino. I assume that your Hardware-settings widged doesn’t show any values as well. In most cases the connection cable is not properly connected or the firmware flash didn’t go well. Are you able to upload a short sketch like blynk to arduino, just to check if the upload is working properly?

Btw, the wires of your board seem different to those in the hardware docs … Are you using a kit from farmbot.io?