We need to make the FarmBot work urgently.
We connected FarmBot (genesis v1.3) to the internet with a wired Ethernet connection.
But we can’t see the farmbot network appear in our wifi connections so we can set it up.

Do you have any trick knowing that we updated the software to v9 and we are in an event where the FarmBot is near lots of other heavy duty electrical equipment.

Thanks a lot,
Carla

Hi @CarlaD, some points to consider

May I suggest flashing v9.1.2 onto a known good SD card and trying once again ?

Hi @jsimmonds
Thanks for your answer.
I did the update (9.11…9.12), but unfornatly I don’t have any wifi between the FB and my iphone / compute/ other cellphone
By the way, it was the same situation yesterday with the 9.1.1 version
Thanks for your help
I think we have to take time to find a solution for our next show.

I’ve observed that the farmbot-xxxx Wi-Fi SSID can take up to 3 minutes to appear ( 2.4GHz band only )

On my Iphone, when I search “manual” farmbot-xxxx", no network appears
Its the same when I do it with the FB process : no FB on wifi networks

Did anybody else meet this kind of situation during an exhibition like us ? And what was your solution ?
Do you think the FB wifi network could be disturbed by the other network around us ?

When he’s back to “his” home, everything is ok. So I think the problem is not the card.

Other question : could it be possible to move the robot directly from an iphone with a single shedule without going trough the server, just for our exhibition and to show how it moves

Thanks all for your help
Stéphane
We are showing the FarmBot in Paris, during the biggest event around agriculture in France, it is called SIA : Salon International de l’Agriculture
We are on the innovation space of the Agriculture Chamber of Normandy. Our front neibourgh is the public french tv France 3
You’re welcome

I have found some devices don’t pick up the FB wifi but it sounds like you have tried a few so I don’t think that’s the problem.

Can you see other wifi networks?

Is your wifi network a home or an organisational network?

A few people have had problems connecting to the FB because their organisational wifi networks are locked down by their network administrators. So if that’s the case I would ask your network admin for help.

Note I also have to wait for 1-3mins before the FB wifi network appears after I have flashed a new card or factory reset.

Do you think the FB wifi network could be disturbed by the other network around us ?

@Stephane . . quite possible. Can you use a wired ( physical ) Ethernet connection ?

Did anybody else meet this kind of situation during an exhibition like us ? And what was your solution ?

I do not, but I imagine these people do : @roryaronson and @RickCarlino

I hope that they can help find a solution at that exhibition. The Wi-Fi spectrum there must be very dense.

Hi @whitecaps and @jsimmonds
The problem appears at the first connection between the FB and us, just when I need to inform him where it must connect itself ( wifi or ethernet)
I can see on my phone, all the other network around me.
I used an ethernet connection 2 days ago but it was the same : the problem is at the first wifi connection when I have to inform the FB on witch network it had to be connected (wifi-ethernet)
Do you think it could be possible to plug directly my iphone on one usb port for the first connection ? So perhaps could the FB be directly connected on 4G. I will try it tomorrow morning
Thanks for your help

The problem appears at the first connection between the FB and us, just when I need to inform him

Ahh, yes . . I realised after I had posted that we usually need Wi-Fi first . . but

If you can find good Network support from Exhibitor Coordinator/Support, then the following might help.

Note that if you could connect wired Ethernet to a small private switch, you could configure FBOS over Ethernet by browsing to IPv4 address 192.168.25.1

If you have a Raspberry Pi TTL to USB Serial cable you can talk to FBOS , e.g. 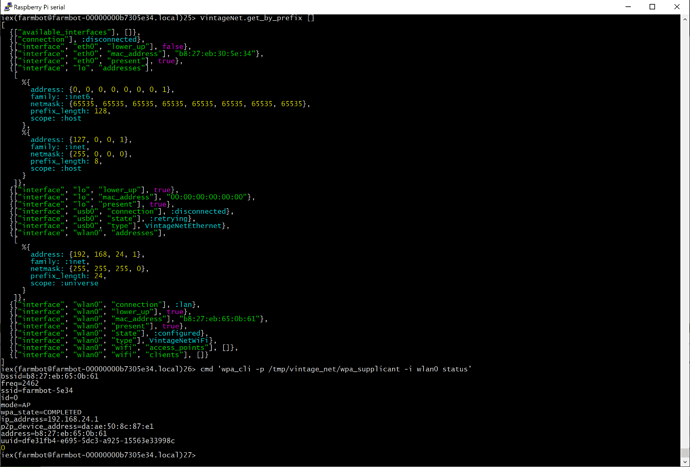 Please we would like to restart the Farmbot and the Raspberry Pi. Is it possible when we’re not connected?

Pull main power for 20s should do it.

Here are some ideas on why a WiFi portal does not appear:

Here are some less likely scenarios:

Some things you can try:

Unfortunately, it is difficult to diagnose these issues without logs.

Hi Rick and John,
thanks for your help and responses, we’re back to the office today, the FB is alwas on exhibition in Paris till the 1er march but still out of order. When It will be back here, we will work on it and trying your solutions.
By the way, the 3D glasses and Microphone from of our neighbour on this event didn’t work at all.
Our next job will be to find the fault and therefore the solution to make it work in a disturbed area.
We keep you informed, thanks to all,
Stéphane

Sorry to hear things are not working yet. Please let us know if any new details emerge @Stephane

My suspicion right now is either WiFi interference or strict security policies on the local network.