PowerLoop not working in v8.0.0 anymore

I managed to migrate the manifest.json file in my personal fork so it can be installed at v8.0.0. There is only one error left, as it constantly shows that the JSON is not valid. All JSON validations that I found in the web are not showing any errors and I also tried to delete unimportant lines from the manifest that may cause issues.

Now when running the farmware, it starts with an error that a file is missing. Then the farmware seems to read all input correctly but does not continue then. After a while sometimes the diagnosis popup shows that the arduino is disconnected and I’m not able to control/estop the device. Rebooting still works and fixes it.

@connor Any idea what causes that ‘No such file or directory’ error or what this missing file is?

I also checked the MLH farmware which has similar issues (no reaction after pressing run, sequence get stuck when executing farmware). Not sure if the input_env are not properly read or if something else is missing on the farmware.

@connor - Sorry for spam, just wanted to let you know whats up.
Got it working again, but no clue how. Yesterday evening the farm event triggered a sequence where the farmware is used and it was running through, but not completing the sequence, so the FIND HOME step that is located after the RUN FARMWARE step was not processed. With that in mind, I’m not sure if the sequence is still running in background and may cause system instabilities.

The FileNotFoundError: [Errno 2] No such file or directory: '/tmp/farmware/PowerLoop/powerloop-master/src/simple_cache.pickle' still comes up every time, but I have no clue what this means or if that could be ignored.

Quick Update while writing:
Looks like all farmwares are having this behavior. The RUN FARMWARE step makes the sequence flow get stuck when the farmware is finished. Steps to reproduce below. 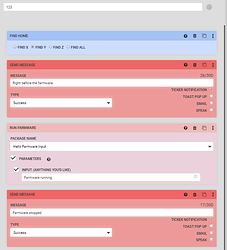 I experienced something similar. After updating to v8.0.0 the Farmware is not working anymore. It says "Pending installation " the whole time. When I flashed the Farmbot OS back to 7.0.1 I was able to install farmware again so it is caused by the new software version I suppose. All other things still work fine, it’s just the Farmware…

Is this still an issue? I run Farmware and therefore I am holding off upgrading to FBOS v8 at the moment.

Powerloop is working at least in my fork, didn’t check the official one. Other community farmwares like MLH or Loop-Plants-with-Filters are still v7 only.

Cool will try and just change the manifests.